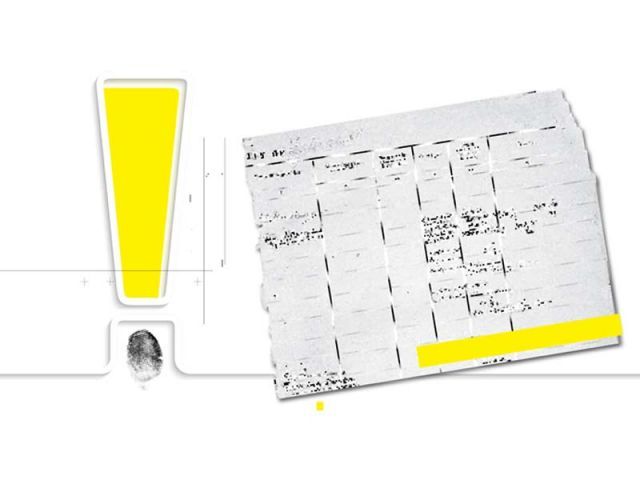 A scanned page of a Property Register the British created in Hyderabad in the 1920s. PHOTO: FILE DESIGN BY MOHSIN ALAM

“As we stand on the brink of the New Year, we hold in our hands a record of what we gained and what we lost. The forthcoming year might be the year of reparation… all our hopes are tied to this notion.”

Several people, incidents, tragedies and breakthroughs made headlines this year on whose brink we stand today. However, 2015 also saw happenings reported by The Express Tribune that might have been buried in the storm of information. But each one of them was historic in its own right, rejuvenating a necessity for living on. A Pakistani voter registers her vote during a local government election at a polling station in Lahore. PHOTO: AFP

Pakistan’s political history has seen numerous highs and lows. The constitutionally-warranted democratic system has been punctuated by several prolonged periods of military rule. Yet military regimes have been the only form of rule to actually implement the local government (LG) system. This form of public administration is seen as the brainchild of military dictators in Pakistan, who utilised the system to exert control and gain legitimacy at the grass-root level. Starting in Balochistan, 2015 saw LG elections being conducted across all provinces for the first time under the auspices of a democratically-elected government.

As many as 15 million pages of land ownership records, which form 90% of Sindh’s entire inventory, were scanned, indexed and computerised as part of a project called Land Administration and Revenue Management Information System (LAMRIS) that could put an end to a history of bribery and corruption. According to a report published by The Express Tribune in August, this database and access to its records are available free for the public. It is six terabytes large, making it the world’s largest database in Sindhi. It was kick-started by a presidential directive to the Sindh government in September 2011. By December more backing came from the Supreme Court that ordered all four provinces to do the same thing. It was because of this pressure and mandate that the feat was achieved in three and a half years. The project costing Rs4,900,000 was paid for by the Qaim Ali Shah administration.

The K-P RTI Ordinance was listed as the third most effective law in the RTI global ranking, scoring

Chitral’s Kalasha community and the National Database and Registration Authority (and the body’s precursors) have shared a bittersweet relationship. The Kalasha religion dates back several thousand years and so seemed the approach of the CNIC issuing authorities until April this year. This year, on directives of the NADRA chairman, the authority decided to add an option for the Kalasha community in CNIC forms, paving way for their official recognition and accommodating a long-standing demand of the Kalasha community. With the incorporation of the new column, Kalasha people have become the fifth religious community in the country to be recognised by the authority. Their struggle for recognition dates back to the time when the three former princely states of Dir, Swat and Chitral became part of Pakistan. Electronic voting machines used for the first time ever

After tales of rigging in the 2013 elections and the post-poll hullabaloo led largely by Pakistan Tehreek-e-Insaf, the elephant in the room trumpeting at its loudest is: will the 2018 general elections be held using biometrics? Not many are aware of this but the Election Commission of Pakistan did make history this year by conducting Pakistan’s first-ever polls using biometrics. Sixty electronic voting machines were used at NA-19, Haripur’s 30 polling stations. Although an Election Commission Pakistan report stated only 46% of the votes could be verified by the machines owing to a variety of reasons, it did say that the commission has successfully achieved the prime objective of the first pilot project which was to practically examine on ground the overall performance of the test run. The report, shared with the media in August, stated multiple test runs will follow to push the success rate near perfection. The existing administrative setup of the Federally Administered Tribal Areas (Fata) came into being in 1901 through an executive order of the then British government, after the promulgation of the Frontier Crimes Regulation (FCR). While Hindus and Sikhs had been residing in their ancestral villages in various parts of the tribal areas for centuries, Christians began arriving and settling in the region when British officers were posted there as civil administrators. During the British Raj, domiciles were not of much importance to Fata’s non-Muslims, but that changed after Independence. According to Fata’s rules and regulations, the political agent of an agency is authorised to issue a domicile to a resident. He can do so on the basis of the requesting individual’s association with local tribes. But non-Muslims do not belong to any of the tribes, therefore, they are not eligible to be issued a Fata domicile, and for decades they have remained deprived of the basic right to purchase property or apply for government jobs. However, this ended in April in a historic move. Khyber-Pakhtunkhwa’s Governor Sardar Mehtab Ahmad Khan signed a summary in this regard, granting Fata’s non-Muslims the right to obtain domicile certificates, making up for 68 years of deprivation. Back in November 2013, Khyber-Pakhtunkhwa (K-P) became the first province in the country to have right to information (RTI) legislation. The RTI law enables citizens to obtain any information held by a government institution and is world over seen important for transparency in the public domain. All government records with the exception of classified information fall under the ambit of this law.

Although Punjab was quick to follow up with its own version of the legislation and hand out a punishment of salary deduction to an education executive district officer in Vehari last year, K-P RTI Commission became the first such body to go after a high-ranking official. In July, Abdul Wali Khan University Mardan registrar Sher Alam Khan was fined Rs25,000 for refusing to provide information about appointments to professor Miraj Khan. Civil society organisations have pointed out that RTI should have been discussed in the assembly before being passed as law. PHOTO: FILE

IPV used for the first time ever in polio campaign

Much was said when Pakistan crossed the 300-case mark for polio in 2014. Pakistan was amongst the only two countries, the other being Afghanistan, to have reported polio cases that year. As of December 21, 51 cases have been reported in 2015, allowing the chatter to die down slowly. For the first time in Pakistan, inactivated polio vaccines (IPV) were used as part of polio campaigns that saw a major boost this year. IPV contains inactivated strains of all three poliovirus types and when administrated, it creates antibodies in the bloodstream and prevents the spread to the central nervous system. IPV is used in the next phase after polio has either been eradicated or used in combination with oral polio vaccines when hot spots become limited. The year 2015 was hence monumental for the cause and witnessed another step towards a polio-free Pakistan. “Oh! So is that all you do or you make a living as well?”

This anecdote was once narrated by a popular Pakistani vocalist during an interview. It really explains the dilemma of those who have to convince their parents and family that music is all they want to do in life. Given its particularities, many musicians say that ours is not a music industry but a music scene only. Piracy is rampant and the frequency of live shows is painfully low. Album sales were a thing of the past and royalties were just out of the question until the break of 2015. EMI Pakistan partnered with New York-based online music platform Saavn and brought the giant to Pakistan. In September, one of Pakistan’s first music streaming sites Patari opened its door to the public. Although musician Haroon Rashid’s Taazi has been around for a while, it hasn’t sent out paychecks as yet. This year has been monumental in this regard — Saavn is already bankrolling Pakistani musicians for their content and Patari becomes the first local platform to pay artists for online plays. Pictures of Arab royals brimming with pride as they stand among corpses of dozens of Houbara bustards have long been circulating in Pakistan. The common man has been daring to ask whether a country like ours has the power to protect a harmless, endangered animal against the bloodlust of foreign dignitaries. But 2015 saw the Supreme Court of Pakistan answer the question. In August, the apex court imposed a ban on hunting of the endangered bird. A three-judge bench headed by former chief justice Jawwad S Khawaja ordered the cancellation of all licenses issued by the federal government to Arab royals for hunting the bird. Fata’s civil rights framework and penal system are plausibly the most unique in the world. The only form of social contract existing in Fata is the draconian Frontier Crimes Regulation of 1901 which basically aims at controlling and registering crimes on government roads, offices or other government installations and connecting passes. The tribespeople have demanded an end for this ‘special treatment’ of their homeland, devised by the British to suit their colonial interests. This year saw the Fata Reforms Bill see the light of the day in the Lower House. It is set to be debated in the assembly and although the proposed amendment is still in limbo, if the bill is passed the people of Fata will be able to climb out of their ongoing predicament and obtain a new lease on life. T

Ali Raj is a subeditor at The Express Tribune Life & Style desk.

New Year resolutions and how to keep them