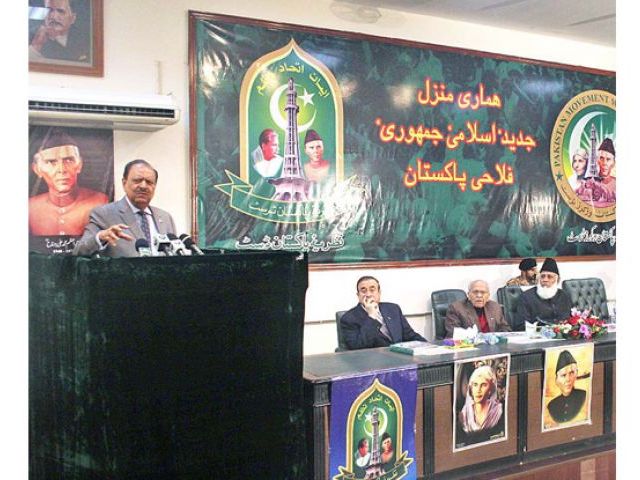 LAHORE: President Mamnoon Hussain on Sunday said that despite the country’s massive debt the national economy has been showing signs of improvement.

Addressing a seminar on “Our Goal – Modern Islamic, Democratic, Welfare Pakistan” organised by Nazria-i-Pakistan Trust at the Aiwan-i-Karkunan-i-Tehreek-i-Pakistan in Lahore on Sunday, the president said the incumbent government had inherited an economy that was in poor state and steeped in Rs14.8 billion in foreign debt with a large portion of our income being used to service it.

But, due to the efforts of the government and Finance Minister Ishaq Dar, the economy was now improving.

He regretted that previous governments had failed to construct new dams or allocate sufficient funds for key sectors such as education, health and energy.

Upon prompting from the audience on building the Kalabagh Dam, Mamnoon said the government was almost ready to construct the Diamer-Bhasha Dam, which would generate 4,500 mega watts of electricity. Further, he mentioned the work on the Gwadar Port, Lahore-Karachi Motorway and the Hazara motorway projects in addition electricity power production through solar and wind.

Mamnoon bemoaned how almost every government department had deteriorated after the ’70s.

“Quaid-e-Azam believed in ‘hard work, hard work and hard work’ and it is by truthful adherence to that saying of the Quaid that we can achieve glory,” he said, adding it is a collective responsibility to make Pakistan prosperous.

Presenting China as an example, he said that its economy was in shambles in the early ’80s but hard work and dedication of the Chinese people helped transform it into an economic giant and a world leader.

The secret, Mamnoon revealed, was that a Chinese ambassador once confided to him that China put aside all of its border disputes and focused on its economy.

The president appreciated Punjab CM Shahbaz Sharif on building the Aiwan-i-Quaid-e-Azam in Lahore.

Assistants of terror: How women raise funds for Da’ish in Karachi