Says PML-N has turned the Punjab Assemb­ly into a rubber stamp
By Our Correspondent
Published: December 21, 2015
Tweet Email 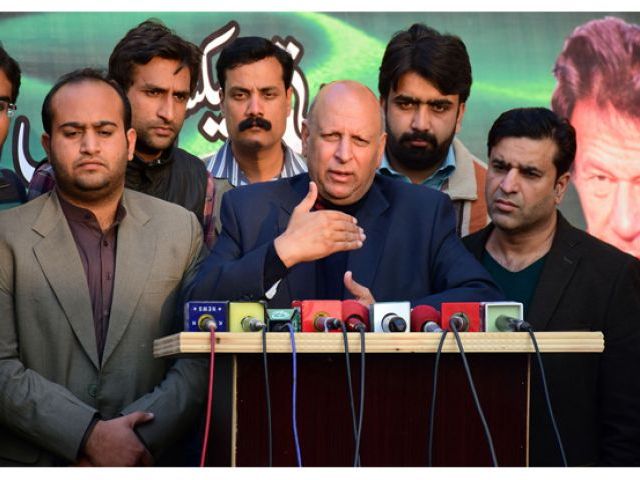 The Pakistan Tehreek-i-Insaf (PTI) will be working on forging an alliance with other opposition parties in the Punjab to address key issues, including electoral reforms, PTI leader Chaudhry Muhammad Sarwar said on Sunday.

The statement came a day after PTI chief Imran Khan announced that the party would soon be formulating a strategy to build a united opposition in the province.

Sarwar was addressing a convention of PTI Youth Wing and the Insaf Students’ Federation at the Chairman’s Secretariat.

“Despite being in power for decades, the Pakistan Muslim League-Nawaz (PML-N) has failed to ensure that institutions are depoliticised,” he said. He said that in contrast to politicised state institutions in the Punjab, all government departments, especially the police, have been made independent of political influence in Khyber Pakhtunkhwa. “PTI will stop raising the issue of rigging if the government refrains from rigging. The party will be working on gathering support from opposition parties to eliminate corruption and injustice from the Punjab,” he said.

He reiterated that the PTI would raise its voice on every platform, including the Punjab Assembly. “The PML-N has turned Punjab Assembly into a rubber stamp. Their agenda is personal gains, not public welfare,” he said.

Sarwar said that development funds were allocated in disregard to people’s problems. “The government has failed to honour promises it made during the 2013 general elections. Even, the chief justice has expressed a lack of confidence in the governance,” he said. “The PTI will not sit silent. It will protest against government policies at all forums,” Sarwar said.

Sarwar said that a number of people were eagerly waiting for the PTI to announce the schedule for its membership drive. “The membership campaign will begin with the announcement of intra-party elections. The party intends to run a massive membership campaign before the elections,” he said. Sarwar said any PTI worker or leader who violated party discipline would be held accountable. “The PTI is taking all decisions in consultation with its workers and leaders. Nobody will be allowed to violate party discipline or hurt the interests of the party,” he said.

Stickers down, banners up