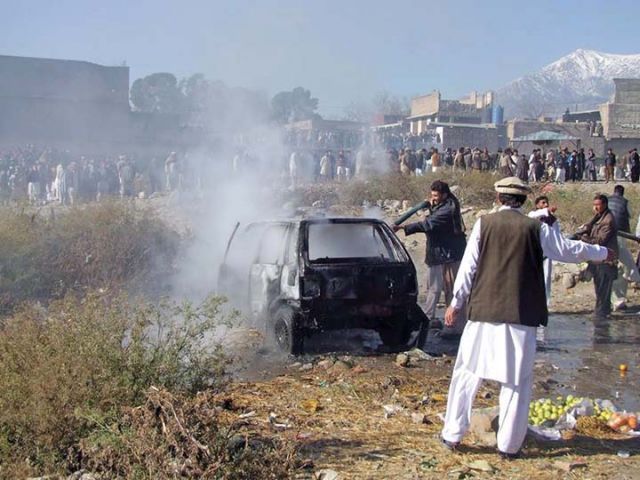 Firefighters extinguish a fire in a vehicle at the bomb site in Parachinar. PHOTO: AFP

A powerful bomb ripped through a busy weekly bazaar in the main town of Kurram Agency Sunday morning, killing 24 people and injuring many more. A proscribed sectarian extremist group claimed responsibility for the blast that came after a long hiatus in violence in the region which has seen some of the worst sectarian attacks in the past.

Local administration officials said the bomb weighed 35 kilos and it was planted in a garbage dump outside Eidgah, in the heart of Parachinar city, the headquarters of Kurram Agency. It was remotely detonated when a Sunday Bazaar, set up near Eidgah, was crowded with shoppers. The weekly bazaar is popular among tribesmen from Parachinar and adjoining areas as it offers everyday items, mainly used clothes, at cut prices.

Officials said the blast was so powerful that it killed 18 people immediately. Another six succumbed to their injuries later at hospitals. The dead and the injured were mostly marketgoers and shopkeepers, they added. Some teenaged vendors and labourers are also among the victims. Political Agent Amjad Ali Khan confirmed the death toll.

Local television footage showed hundreds of marketgoers fleeing the area, which was strewn with clothing and debris from the explosion as police tried to cordon off the location and ambulances rushed to the site.

In all, 50 people were wounded in the blast. They were driven to the Agency Headquarters Hospital Parachinar and other hospitals in the city. Hundreds of tribesmen were seen queuing up outside the hospitals to donate blood. Officials and medics feared the death toll might go up as some of the injured have life-threatening wounds.

Since the Agency Headquarters Hospital Parachinar is poorly equipped, the local administration requested the paramilitary Frontier Corps to airlift the critically injured to Peshawar. Subsequently, two military helicopters ferried 22 injured to Peshawar where a state of emergency was declared at the main hospitals.

However, the casualties were shifted to the Combined Military Hospital (CMH) instead of the city’s main Lady Reading Hospital. According to the ISPR, 12 of the injured were airlifted from Parachinar and 10 from Thal Cantt where they were provided preliminary treatment. At least two more injured are admitted at CMH Thal and one at CMH Kohat.

Sajjad Hussain, 43, who owns a stall at the bazaar, said he was bringing tea from a nearby stall when the bomb went off. “The explosion was huge, it threw me back five feet and human flesh and blood hit my face and body, I was covered all over,” he told AFP in a Peshawar hospital, where he was being treated for shrapnel wounds to his legs.

Twenty-four-year old Aftab Alam, who cleans vehicles at the bazaar, said he was sitting in a van when he heard the blast. “There was a loud bang and something hit my shoulder, a pool of blood was coming out of my shoulder and when I stepped out of the van there was dust and smoke and everybody was screaming,” Alam told AFP at the same hospital.

“The air was filled with the stench of burnt human flesh and blood,” he said.

The outlawed sectarian extremist group Lashkar-e-Jhangvi (LeJ) said it had planted an improvised electronic device at the Sunday Bazaar in retaliation for Shia support of Iran and Bashar al Assad. “We warn the Shia parents that if they don’t stop their children from participating in the war of Bashar al Assad [in Syria], they would face more attacks like this,” Ali Bin Sufiyan, believed to be LeJ spokesperson said in a message sent to the media.

Kurram Agency, which shares borders with tribal regions of North Waziristan, Orakzai and Khyber, is known for sectarian clashes between Sunnis and Shias. However, Sunday’s blast happened after a long hiatus in violence resurrecting fears of renewed sectarian tensions in the region.

Prime Minister Nawaz Sharif condemned the blast and expressed grief and sorrow over the loss of life and property. “Our resolve to eradicate the menace of terrorism is getting stronger and stronger with the loss of innocent lives and sacrifices of the officials of Pakistan Army and law enforcement agencies,” said the prime minister who was in Turkmenistan on two-day visit. He said the fight is an irreversible process until terrorism is rooted out from the country.

Khyber-Pakhtunkhwa Chief Minister Pervez Khattak and PTI Chairman Imran Khan also denounced the deadly bombing. “Now, all Pakistanis are on the same page and they will fight against terrorism till its elimination from the country,” said Imran, who was at the Islamia College University in Peshawar at the time of the attack.

ANP Central President Asfandyar Wali and Central General Secretary Mian Iftikhar Hussain said such acts of terrorism could not dispirit the public. “This act of terror is most probably a response of the ongoing Operation Zarb-e-Azb,” they said in a statement.