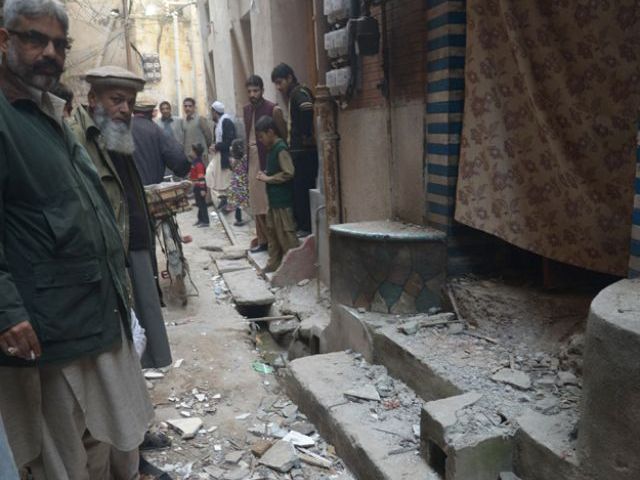 The windows of nearby houses have been damaged and five neighbourhood women were injured inside their houses. PHOTO: ONLINE

PESHAWAR: At least five women were injured in a medium-intensity blast in Mohalla Bajauri Khord of Sarki Gate on Sunday.

A police official told The Express Tribune, a device weighing three kilogrammes was planted near the house of Amjad Khan, a local contractor. “It went off and triggered panic across the neighbourhood,” he said. “The windows of nearby houses have been damaged and five neighbourhood women were injured inside their houses when they were hit by broken glass.”

He said this was the second time that this house had been attacked.

“Around a year ago, Amjad’s house was targeted in the same manner and nearby houses were damaged,” he said. The official said the contractor was constantly receiving threats and extortion demands.

“A SIM card from Afghanistan was being used to make the call,” he said.

He said a recent spate of bomb blasts by extortionists was a source of concern. Dozens of people are getting threatening calls in the district and at least six houses have been targeted in similar fashion.

Police found three bags full of empty mortar shells from a field in Garhi Sobat Khan within the jurisdiction of Khazana police station.

A police official told The Express Tribune mysterious bags were found abandoned in the fields and were inspected by the bomb disposal unit. “There were 80 shells and most were without explosives or had already been used,” he said.

Mortars and artillery shells are processed by terrorists who extract the high-quality explosives to use in IEDs.

For no good reason: Van driver accuses governor’s son of thrashing him