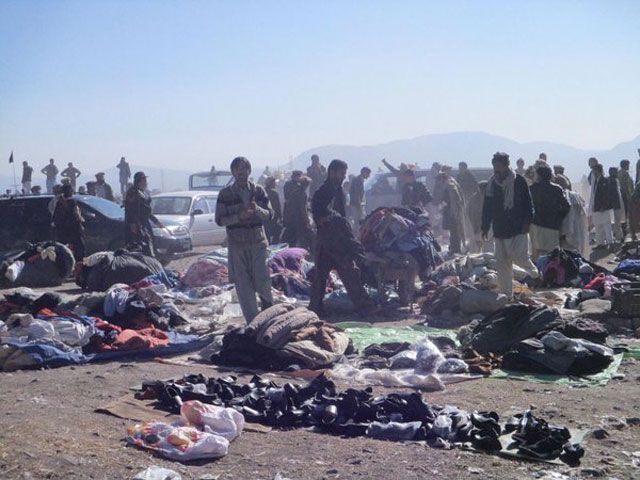 PESHAWAR / ISLAMABAD: A bomb hidden in a bag ripped through a crowded bazaar in a mainly Shia area of northwestern tribal region Sunday, killing at least 23 people and wounding more than 30, officials said.

The death toll was expected to rise after the explosion at the Eidgah used-clothes market in Parachinar, the capital of Kurram Agency on the border with Afghanistan.

“The death toll has reached 23 as many of the critically wounded succumbed to injuries as they were being shifted to helicopters to fly them to Peshawar,” Amjad Ali Khan, the political administrator of Kurram, told AFP. Paramedics and residents gather outside a hospital after a bomb explosion at a market in Parachinar, the capital of Kurram tribal district, on December 13, 2015. PHOTO: AFP

Following the blast rescuers rushed to the scene of crime. Meanwhile, security forces cordoned the area and launched a search operation.

“A bomb disposal squad has reached the spot and is trying to ascertain the nature of the blast,” one of them added.

The bodies and the injured were shifted to the Agency Headquarters Hospital in Parachinar.

Kurram is one of the seven semi-autonomous tribal agencies, which are governed according to local laws and customs. They are the frontline of Pakistan’s battle against an insurgency that began after the US-led invasion of Afghanistan forced Taliban and al Qaeda militants to flee across the border.

Overall levels of violence have decreased this year following a nationwide military-led offensive Zarb-e-Azb against extremists across the country, blocking their sources of movement, communication and funding.

There has also been a crackdown on extremist groups that target religious minorities. In late July, Malik Ishaq, the leader of an anti-minority group behind some of the worst sectarian atrocities in Pakistan, was killed in a shootout with police, along with 13 other extremists.

“We claim responsibility for the Eidgah Bazar, Parachinar bomb blast. It was a revenge of the crimes against Syrian Muslims by Iran and Bashar al Assad,” the group’s spokesperson, Ali Abu Sufiyan said on Sunday.

In a statement, the group warned of more attacks “if the people in Parachinar did not stop sending people to take part in Syrian war”.

Details of the victims