Muslim-owned cafe in US defaced with Nazi graffiti, set ablaze

Muslim-owned cafe in US defaced with Nazi graffiti, set ablaze 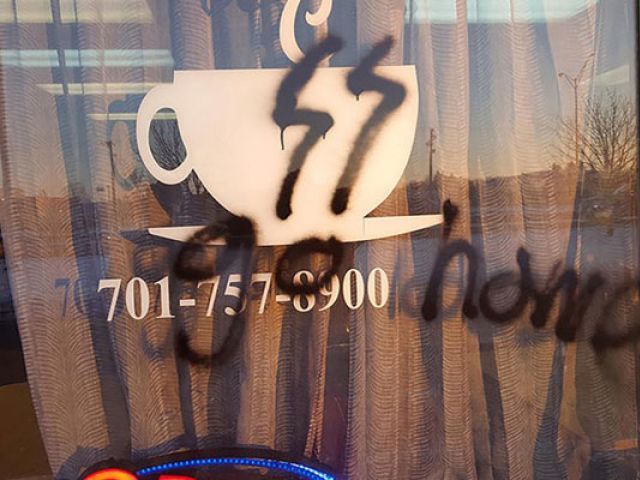 A restaurant owned by a Somali-Muslim in Grand Forks, North Dakota was burnt down last week following an incident of vandalism.

Two days after someone painted the Nazi SS logo on Juba Café’s window with “go home” written beneath it, a man set the restaurant on fire.

While the arson attack appears to be an act of terrorism to the Somali-Muslim community, police said the motive of the attack can only be determined after they apprehend the suspect. The police is searching for a 25-year-old man, Matthew Gust, who is charged in the deliberate torching of the restaurant.

The Minnesota chapter of the Council on American-Islamic Relations released a statement shortly after news of the arson attack spread Tuesday, saying the incident fit a “pattern” of hate crimes targeting Muslims or people perceived to be Muslims in the aftermath of California shootings by a Muslim couple and the deadly Paris attacks claimed by the Islamic State.

There has been widespread speculation that the arson attack was racially or religiously motivated. Anti-Muslim rhetoric and Islamophobic incidents are on a rise in the west following California shootings and the deadly Paris attacks.

This article originally appeared on The Daily Beast.

Might be forced to run for president: Will Smith