Khan Faraz finds his true callin­g in a profes­sion that many may not deem as lucrat­ive
By Humay Waseem
Published: December 12, 2015
Tweet Email 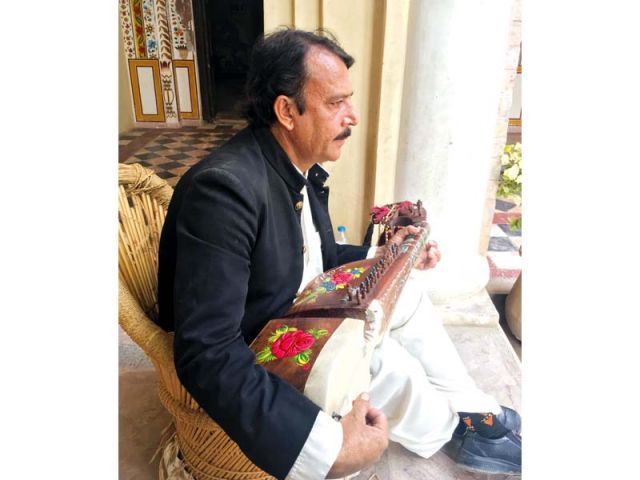 The now middle-aged Faraz says he learned to play the rubab in his 20s. PHOTOS: PUBLICITY

The view is breathtaking in Saidpur. Among the places in Pakistan that house diverse communities, the village is home to Hindu temples, gurdwaras and Sufi shrines. A five-minute drive away from Islamabad’s upscale localities, Saidpur has become a major tourist attraction in recent years, with its rich heritage and folklore having riveted visitors over the years.

Amid the panoramic view plays the rubab. Sitting hunched over on a bamboo chair and strumming Pashtun folk melodies on his floral-painted lute is Khan Faraz, whose tunes reverberate through the Margalla Hills.

In 2002, Faraz moved to Islamabad and was hired to play for the visitors of Saidpur. With a wife and four children to support, he acknowledges that making a living out of playing music comes with financial difficulties. “I’m lucky if I get this chair to sit on,” he says with a chuckle. “But I am grateful for whatever I have. I am able to meet my basic needs even if not all of them.”

The now middle-aged Faraz says he learned to play the rubab in his 20s. “This was a time when nobody around me played it. I was the only person in my village near Nowshera, who was learning how to play it,” he adds. It was by accident that Faraz discovered his love for music. “I burnt my right hand in my job as a mason, which left me unable to pursue any job for two years. During that period, I started taking rubab lessons from master Guljan Sadiq to keep myself occupied,” he shares.

It was nothing short of a long and difficult journey for Faraz to learn the rubab. “But the moment I would start playing it, it seemed like all my worries would go away,” he says. “I worked as a mason, a driver and even ran a hotel. But now, I’m finally doing what I’m naturally inclined towards — playing the rubab.” Learning to play the instrument wasn’t the only challenge for Faraz. “My family objected to the idea of me choosing to play an instrument, rendering it an ‘indecent’ profession but I felt a special connection with it. The moment I’d play it, I’d feel happiness in the air. Not only for me but also for the people around me,” he states.

Although his journey as a full-time folk musician was riddled with ups and downs, he has found his true calling in the profession. What he finds particularly interesting about his job is the ability to alter visitors’ mood with his music. “I get to play for people from all walks of life. Whoever comes here goes back with a smile. If I see a sad person, I will start strumming Karara Rasha. If I see a couple, I’ll start playing Bibi Shirin,” she shares. “The other day, I was playing Bibi Shirin and a bunch of Taiwanese boys started dancing the way Pashtuns do,” says Faraz with a glint in his eye. “I don’t know where they learnt that dance from,” he adds with a laugh.

Faraz is doing his part to preserve this musical tradition. “I’ll be teaching my son to play the rubab so that the practice doesn’t die in my family at least,” Faraz says with a look of contentment and goes on playing the instrument.