Our most re-tweeted stories of 2015

Our most re-tweeted stories of 2015 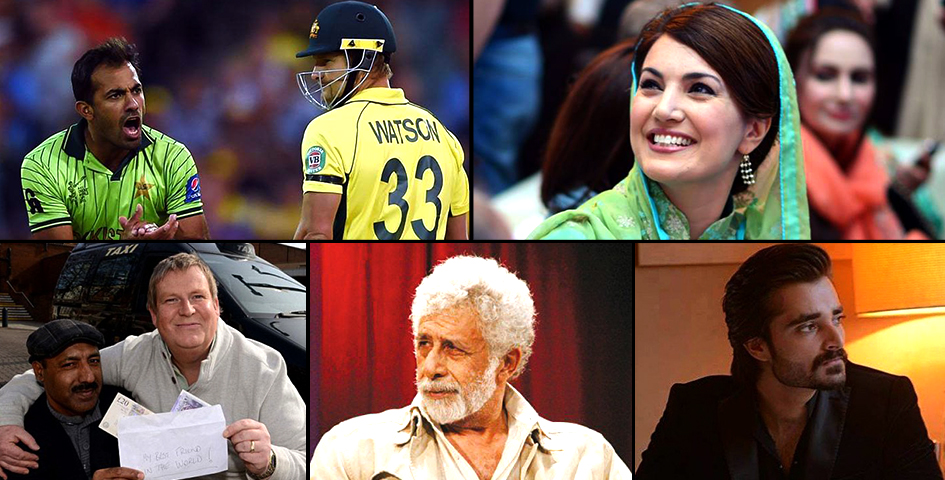 There is no single measure of a news story’s success, but if we were to gauge how much our readers on Twitter liked certain stories, we’d have to settle on one metric – the number of retweets.

Cricket legend says he cannot wait to meet the guy who made Watson look like he was at school http://t.co/aI0Iyv15TP pic.twitter.com/WXEoRB0LTM

In March this year, bowler Wahab Riaz was fined half of his match fee by the ICC for mocking Australian all-rounder Shane Watson and sending a ‘kiss’ in the air, while Watson was fined only 15% of his match fee.

The March 20 Word Cup Qurater Final saw the players exchange hot words, with Riaz even sarcastically applauding the batsman for playing and missing.

Days later, cricket extraordinaire Brian Lara said that ICC’s decision to fine Riaz was “uncalled for”, and even offered to pay for the fine.

Pakistani taxi driver returns £10,000 to passenger who left it in the back of his taxi http://t.co/o58hvlujFI pic.twitter.com/y5edGABDTr

An honest Pakistani taxi driver in the UK returned a hefty sum of money to a passenger who had left it on the backseat of the taxi. Mohammed Nisar had been driving Adrian Quinn, a business owner, to a train station in West Midlands. When Quinn left the vehicle in a rush he forgot the bag that contained the cash.

Impressed by Nisar’s honesty, Quinn offered him a cash reward.

Early this year, Facebook removed a post by actor Hamza Ali Abbasi regarding Charlie Hebdo and the limits on free speech. Soon after Abbasi posted a screengrab of the the Facebook page informing him of the post’s removal.

Indians being brainwashed into believing Pakistan is the enemy: Naseeruddin Shah http://t.co/fm5vBB2pxw pic.twitter.com/gQSE0vghg4

Veteran Bollywood actor Naseeruddin Shah in March expressed regret at the animosity towards Pakistan in his home country.

“It is tragic that often-times performers from Pakistan are prevented from performing in this country,” he said. “Recently, there was a very disturbing instance of a Pakistani artiste’s work being destroyed in Ahmedabad. But they welcome us in Pakistan with open arms.”

A pregnant Muslim woman wearing a headscarf was violently assaulted in southern France in March this year. The 29-year-old, who was hospitalised after the attack, claimed that the attacker pulled on her veil, grabbed her by the hair, threw her to the ground, and hit her several times.

“From Saudi Arabia, Wahabi mosques are financed throughout the world,” Gabriel said.

Gabriel, who is Chancellor Angela Merkel’s deputy in a left-right coalition, warned against alienating Saudi Arabia — a crucial player in the bid to end the Syrian war — with too much criticism.

“At the same time we must make it clear to the Saudis that the time of looking the other way is over,” Gabriel said.

"If you have a husband like Imran, you don't need any other jewel," says #RehamKhan http://t.co/MnRWiHS9LC pic.twitter.com/zBVXHy5v8F

In April this year, during by-polls in Karachi’s NA-246 constituency, PTI chief Imran Khan’s then wife Reham Khan said, “If you have a husband like Imran, you don’t need any other jewel.”

The eldest son of the prime minister and vice president of the UAE and ruler of Dubai Sheikh Mohammed bin Rashid al Maktoum passed away in September this year.

In late June, the BBC reported, citing an authoritative Pakistani source, that officials in the MQM had told UK authorities that they had received Indian government funds.

The report stated that British authorities held formal recorded interviews with the senior MQM officials and that a Pakistani official had told the broadcaster that India had trained hundreds of MQM militants over the last 10 years.

Indian authorities described the claims as “completely baseless”, while MQM spokesperson Wasay Jalil said that it was a very old allegation “with nothing new in it,” and that the party would soon comment on the “baseless story”.

– Since some stories are tweeted multiple times, the retweets they acquire are divided among the tweets, making those tweets rank lower than they would if there was only one tweet per story