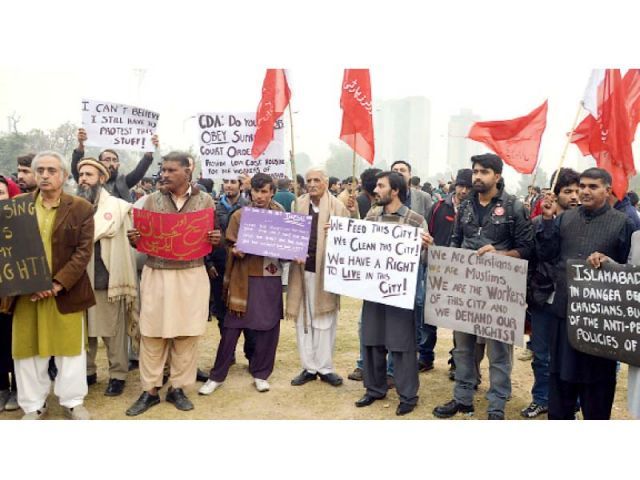 They demanded of that the civic agency, instead of misleading the Supreme Court of Pakistan over the issue, should implement the apex court’s decision regarding provision of affordable housing for low-income groups.

A recent reply submitted to the Supreme Court by the CDA claimed that the rapid growth of Christian residents in informal settlements might soon make Muslims a minority in the capital.

The dwellers of informal settlements, both Christian and Muslim, said that they condemn the CDA’s classism and bigotry across religious lines and were united in their struggle for affordable housing and shelter, in line with the constitution and SC orders.

Fazal Shah, former resident of the demolished I-11 slum, said thousands of residents evicted from the I-11 were still shelterless, as only a handful of evictees could afford to rent shelter.

He said that the CDA had pushed tens of thousands of people, including children, further into poverty by displacing them and destroying the community that had served as their safety net.

He said that the Supreme Court had affirmed that the destruction of the I-11 slum was an unlawful act and called on the CDA to provide resettlement on affordable terms for those who had lost their homes.

Awami Workers Party arranged the protest gathering. AWP Punjab President Aasim Sajjad Akhtar said the SC, as well as renowned housing experts like Tasneem Siddiqui, had called for the CDA to institute a regulatory body to survey and regularise slums, and that the authority had yet to act in this regard.