Which Pakistani song of 2015 is your favourite?

Which Pakistani song of 2015 is your favourite? 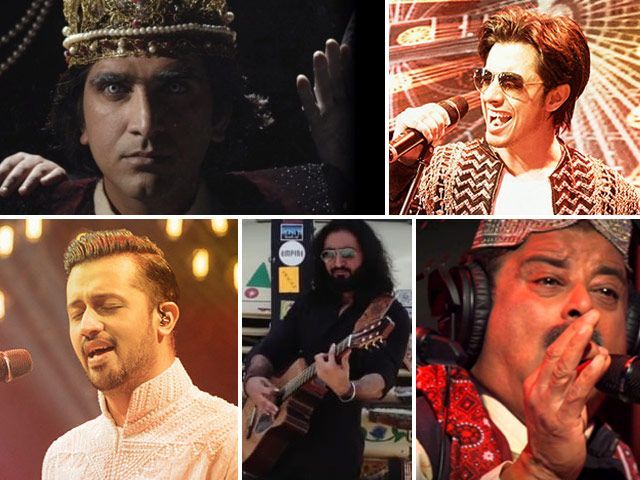 Vote for your favourite track

2015 was quite an eventful year for Pakistani music.

Several albums were released; celebrated acts like Noori, Call and Mizmar made comebacks while Coke Studio completed another season. Upcoming acts like Khumariyaan, Malang Party also gained a foothold and most importantly, the dream of artists making a living out of their recorded music saw the light of the day with the emergence of online streaming platforms like Patari and Taazi.

These 12 months were perhaps the busiest for the industry in hindsight.

Here is a list of the top 10 tracks that made it big this year:

Asrar has rightfully cemented his identity as the most promising musician to come out of Pakistan in the recent past. Mast Hua is a refreshing track with extremely pleasant lyrics and melody. The video is filmed through a selfie stick while Asrar and his band mates are en route to a concert location.

An opus of Nabeel Shaukat Ali’s artistic prowess, Bewajah is one for the crowds to hum to. While Nabeel’s voice quality and Sajid’s soulful reciprocation on the flute warm the heart, the string section’s riffs provide the long overdue goosebumps.

Haider Ali’s guitar notes on the keyboard walk the listener through the domain the composition transports them to. The music is not only reminiscent of String’s coming-of-age record Koi Aanay Wala Hai (2008), but also belts out nostalgia of popular Pakistan music in days of yore, when the playing was crisp, the Urdu was right and the product was honest.

The product of Fareed Ayaz and Co is authentic and draws from the specifications of high art. It gives you little time to ease into the composition and plunges straight into the Khusruvian classic. Ghar Nari is brilliant and exceptionally uplifting. It is one song in the upcoming Ho Mann Jahaan’s soundtrack that will make many look for a working download link.

It is safe to say Ali Zafar saved season 8 of Coke Studio for Bilal and Faisal. With a plethora of covers and revisits already on the assembly line, Ali’s Axl Rose produced sheer magic with an original that leaves little room for scrutiny. It has been long since the last time we heard such cleverly-crafted lyrics coupled with an on-point arrangement that do justice to their hype.

No one, us the least, expected the electronica-infused, dub-step sound of Aik Tha Badshah, which comes as a sonic surprise. It is a strange diversion from the live, earthy sound of their earlier records. However, the single’s Begum Gul Bakaoli Sarfarosh version is a little more Noori than the version released separately with a video that may be Noori’s most ambitious project yet. Replete with the clap-along-sing-along chorus break, the number found favour both live and in the car.

While a comparison with the original and an evaluation based on the aesthetics of qawwali are both unfair and unyielding, the attempt will certainly not make the mighty Sabris turn in their graves. Coke Studio’s version of the qawwali is an honest attempt at bringing to light the multifaceted musical acumen that Atif Aslam is hell-bent on portraying.

While Atif received flak over his rather flippant attempt at the classic, Amjad wasn’t entirely unimpressed. “I really like how the music was arranged. Atif didn’t do badly. I wish he could have worked on his diction a little more,” Sabri maintained.

“There is one track that whenever I listen to I start crying. Although I have made the track myself, written it with Abba [Anwar Maqsood] and mixed it in the studio for almost a month, even now when I hear the song in the car I feel emotional. And that song is Talabgaar, “These were Bilal Maqsood’s words when he spoke about Talabgaar during Moor’s press launch.  And his self-praise is not an overstatement as Javed Bashir’s raw vocals mixed with a composition that gets more dynamic with time leave a lasting impact on the listener.

In this one-of-the-most-well-thought-out-product from Coke Studio 8, Atif Aslam seems at peace with rediscovering his older self that bothered little about sensibilities and sings because his calling forced him to. Had it not been for Mai Dhai’s simplicity, Atif would not have been able to shun the commercial element in his works for the seven minutes.

It is not just a naat or a qawwali – it is a lot more than this. It is a magical spell, which, for a good six minutes, keeps you enchanted and takes you on a ‘secret journey’, as Sting would have put it. Sherry’s hard-hitting vocals and the simplicity of arrangement and groove, together, reflect on the turbulence this soil has witnessed in recent times.

The song features Sherry, famed for his stints on Aamir Liaquat’s shows, on the vocals, Babar Sheikh on the bass, Omran Shafique (Momo) on the electric guitar, Sikandar Mufti on djembe, and Rizwanullah Khan on slide guitar and banjo.

Now in their fifth year, Khumariyaan is a four-member band that stands strong with Sparlay Rawail on lead guitars, Aamer Shafiq on rhythm guitars, Farhan Bogra on rubab, and Shiraz Khan on percussions. It hasn’t been long since the mighty rubab reappeared on the scene, this time clasped by long-haired, jeans-clad youth whose urban sensibilities helped rebrand the traditional instrument for the newer audience and Tamasha is a testimony to that.

Vote for your favourite track here:

Mention in the comments section if you think we missed out on any.