Younus hopes to bag Player of the Year award as well

Younus hopes to bag Player of the Year award as well

Sarfra­z become­s first Pakist­ani wicket­keeper to be named in team of the year
By Our Correspondent / Nabeel Hashmi
Published: December 2, 2015
Tweet Email 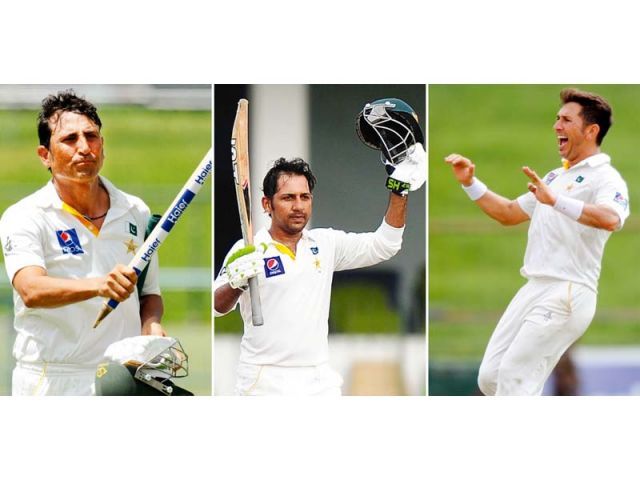 Younus, Sarfraz and Yasir were inducted in the ICC Test Team of the Year for the first time. PHOTOS: AFP

For the first time ever, three Pakistan players — Younus Khan, Sarfraz Ahmed and Yasir Shah — have been named in this year’s ICC Test Team of the Year since the inception of the concept in 2004, with Younus hoping to win the Test Player of the Year trophy as well.

Meanwhile, no Pakistan player could break into the ODI team of the year.

So far, Pakistanis have made it to the list of ICC’s Test Team of Year on eight occasions, with Mohammad Yousuf getting in twice (2006-07), while those who have been named once are Inzamamul Haq (2005), Mohammad Asif (2007), Saeed Ajmal (2012), and now Younus, Sarfraz and Yasir.

Yousuf is the only Pakistani who won the Test Player of the Year award in 2007, and now Younus hopes to become the second player from the country to bag the honour.

“I’m a positive person and there is hope that I’ll get my maiden Test Player of the Year award this time,” Younus told The Express Tribune.

“The nomination in the team arrived late but that doesn’t matter to me as such, because I’ve been in top 10 Test batsmen for the last eight to ten years. What’s important for me is to perform consistently in the team’s cause.”

Younus has been in prolific form ever since he was dropped from the ODI team in 2014. He blasted the then selection committee, led by Moin Khan, for unjust treatment, and since then has broken records after records which include three back-to-back Test centuries against Australia, most centuries by a Pakistan, highest run-getter in Tests for Pakistan besides others.

Sarfraz, who became the first Pakistan wicketkeeper-batsman to make the coveted list, said the achievement was just the start of his journey.

“I’m ecstatic that my performances have been recognised at the highest level, but I want to keep my feet grounded,” said the 28-year-old.

“I want to keep winning matches for Pakistan in all three formats for years to come. My goal is to keep working hard and improve further so that I can compete with the best in the world and contribute positively for my country.”

The ICC Test and ODI Teams of the Year 2015 were chosen by a special appointed selection panel chaired by ICC’s Cricket Committee Chairman and former India captain Anil Kumble.

The qualification period ran from September 18, 2014 to September 13, 2015. In that period, Pakistan spinner Yasir took 61 wickets in 10 Tests and also became the fastest Pakistani to reach 50 Test scalps — in just nine matches.

4th Test: India in no mood of letting up despite series win