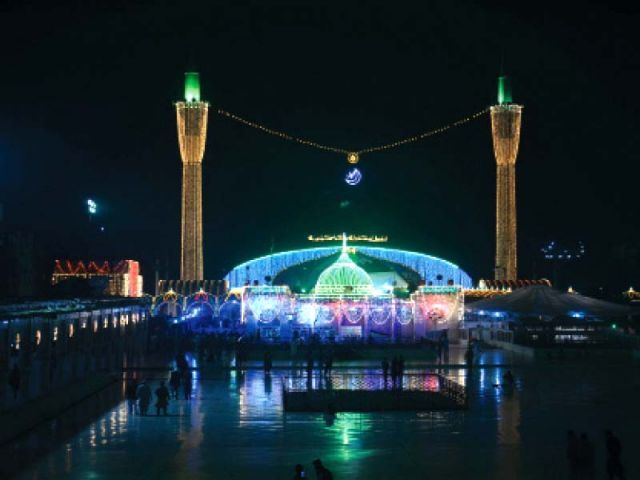 Data Darbar has been illuminated for the duration of the three-day urs. PHOTO: ABID NAWAZ/EXPRESS

They laid a chaddar at the tomb. Qari Sadaqat Ali recited verses from the Holy Quran and Hafiz Marghoob Ahmad Hamdani recited a naat.

Data Darbar mosque khateeb Mufti Ramazan Sialvi led a prayer for peace and prosperity in the country. He also prayed for Pakistan Army’s success in the Operation Zarb-i-Azb.

The dastar bandi of the guests was followed by inauguration of the milk sabeel. Shrine officials briefed guests about the ongoing projects aimed at improving facilities for the devotees. An institute was inaugurated on the occasion that will train Jamia Hajveria students in Arabic, English and computer- and -cell phone repairing.

Stringent security arrangements were in place. Streets leading to the shrine were closed for traffic. The adjoining roads were cordoned off using cargo containers and barbed wire. Walkthrough gates have been installed at entrance to the shrine.

Data Darbar Administrator Noor Muhammad Awan said five-tier security measures had been adopted. He said more than 100 surveillance cameras had been installed at and around the shrine. He said around 1,800 policemen and 175 private security guards were on duty at the shrine.

All businesses near the shrine remained closed until noon. Food stalls were not allowed.

Awan said the government had released Rs9 million to organise the urs. He said three generators had been installed to ensure uninterrupted power supply. The Lahore Electric Supply Company, the Water and Sanitation Agency, the Civil Defence Department, Rescue-1122 and the Health Department had set up camps to provide assistance to the visitors.