Claims PTI will be victor­ious in the Decemb­er 5 LG polls in the port city
By Tuba Athar
Published: November 30, 2015
Tweet Email 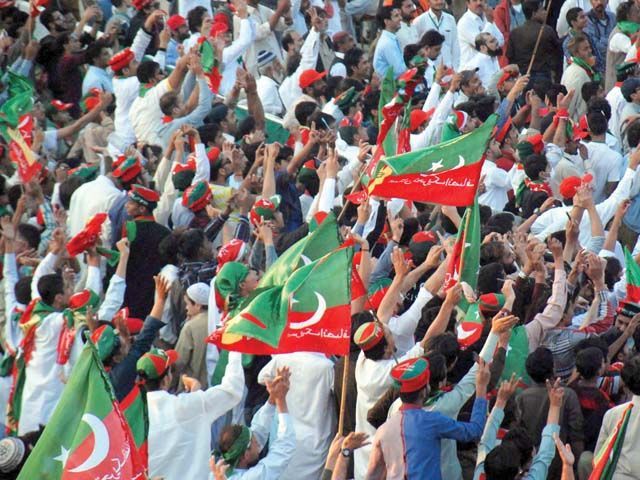 Pakistan Tehreek-e-Insaf (PTI) chief Imran Khan said on Sunday that his ‘Naya Pakistan’ vision was incomplete without a ‘Naya Karachi’, as he plotted his party’s victory in the December 5 local government (LG) elections in the port city.

The PTI chief also voiced confidence that his party’s candidate would emerge as Karachi’s new mayor.

Imran Khan sees his vindication in a calmer Pakistan

Addressing a meeting in the city’s Lyari area, Imran said the politics of hate, which, according to him, started 30 years back, had destroyed the city.

“I ask the people to vote for the PTI and give us a chance to work in the city as the ones who are constantly being elected have delivered nothing to it,” Imran said, in an apparent reference to major parties in Sindh – the Pakistan Peoples Party and the Muttahida Qaumi Movement (MQM).

Imran said before the mid-1980s Karachi was progressing. “It was the ‘City of Lights’ …people used to roam freely without any fear of targeted killing or snatching,” he said.

One rally, two destinations: Imran ends rally as JI chief takes it ahead

He said political forces later divided the city on the basis of ethnic and religious grounds for their own benefit. “I have seen the downfall of Karachi,” he said, adding that Karachi was systematically ruined to shift Karachi’s investment to Dubai.

Denouncing the arch rival MQM’s slogan for the LG election ‘Mayor Tou Apna Hona Chaheye’, Imran Khan asked if he is not from the people. “I hold a green passport and everything that belongs to me is here,” Imran said, obliquely referring to British nationality of the MQM chief Altaf Hussain.

The PTI chief, however, vowed to establish a system of justice and fix the police department for good. “Let us deliver for one more year in Khyber Pakhtunkhwa (K-P) and people will vote for us on the grounds of our governance in the next elections, without any election campaign,” Imran claimed.

Earlier, addressing another corner meeting at Banaras Chowrangi, the PTI chief announced that his party would end the monopoly of a single party in Karachi. He also urged the party activists to do door to door campaigns and spread the party’s word. “After interacting with the people of Karachi, I can see that Karachi has changed,” he said.

The PTI chief spent a busy day in Karachi, addressing party supporters and workers at different spots. He marched through different areas of the metropolis along with his party leaders in the form of a rally. He also went to the house of the Pakistan Air Force’s martyred pilot Mariam Mukhtar and offered condolence.

Chandi Ghars: Making a home out of garbage