Wood burnin­g is one of the main reason­s for excess­ive air pollut­ion in these and other areas.
By Shabbir Mir
Published: January 6, 2011
Tweet Email 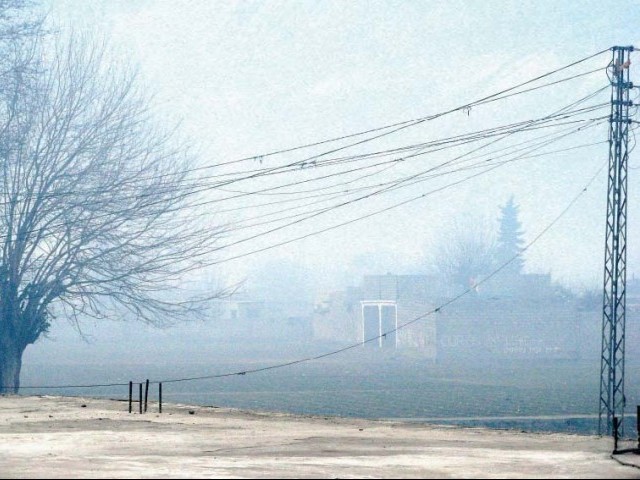 GILGIT: Air pollution in Gilgit has increased to such an extent that local people are experiencing eye irritation in open places after sunset.

From a higher altitude, a thick cover of smoke can be seen enveloping the entire town after sunset which remains suspended over it till dawn. It recedes only after sun is high on the horizon.

This continues throughout winter, with pollution increasing with each passing year.

“I usually go out at night. I experience so much irritation that my eyes become watery,” said Tufail Khan, who lives in Kashrote. He, however, does not experience any irritation when he is inside his room. Khan is not alone: most of the people in Kashrote and adjacent villages have similar complaints.

Wood burning is one of the main reasons for excessive air pollution in these and other areas.

Although Gilgit-Baltistan does not have any industry but as many as 50,000 people in Gilgit uses wood burning for heating in winter, when temperature drops below -11ºC.

“You can well imagine the amount of smoke as everyone burns firewood or anything else within their reach,” said Rehmat Karim, a student of environmental sciences. “It is not just firewood smoke,” he said, adding that paper, tyres, used motor oils and kerosene were also being used for that purpose.

However, environmentalists do not agree with public perception. “We need to have it tested to establish the nature of irritants,” said Farasat Ali, an environmentalist working with the World Wide Fund (WWF) Gilgit office. “This (phenomenon) is called environmental inversion”, he added.

He said that the issue would get complicated unless deforestation was controlled and trees were planted on a massive scale.

PCO judges case: Judges should have adhered to the Constitution, says Justice Siddiqui