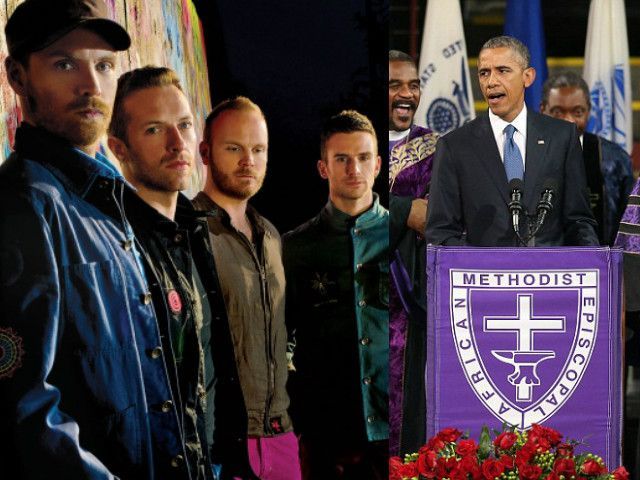 A recording of the US President singing 'Amazing Grace' will be an interlude on the band's seventh album.

The British rock band has found a new fan and it is none other than the President of the United States.

And now Barack Obama will be singing on Coldplay’s new album A Head Full of Dreams. The move came in after the US leader sang the band’s song Amazing Grace at the funeral of a victim of the Charleston shooting in June. Chris Martin, the band’s frontman, requested to use the recording because of its ‘historical significance’. “We have a tiny clip of the president singing Amazing Grace at that church,” Chris was quoted as saying, reports The Sun.

He said they used it “because of the historical significance of what he did and also that song being about ‘I’m lost but now I’m found’.”

According to sources quoted by The Sun, the White House has granted permission for the band to use the clip as the President “clearly loves Coldplay”. It will serve as an interlude on the album.

“Barack Obama wouldn’t let just anyone feature his vocals on the record, especially considering what a deeply emotional moment it was for him,” the paper quoted a source close to the band as saying.

“But he clearly loves Coldplay and is happy to be a part of their music history. The band was obviously thrilled,” the source added.

Earlier in 2012, Obama claimed to be a Coldplay fan, but the members didn’t actually believe him.

“I met Barack Obama in the summer and one thing he said to me was, ‘Oh I have your songs on my iPod,’ but I just thought, ‘Oh I bet he says that to every pop star he meets.’

“I can’t get my head around the notion that the President of the USA would have any of my songs on his playlist. It is just too surreal,” said Chris. A Head Full of Dreams is Coldplay’s seventh studio album and is slated to release on December 4. Apart from Obama, Beyonce, Blue Ivy, Chris’ ex-wife Gwyneth Paltrow and Annabelle Wallis have also contributed for the album.