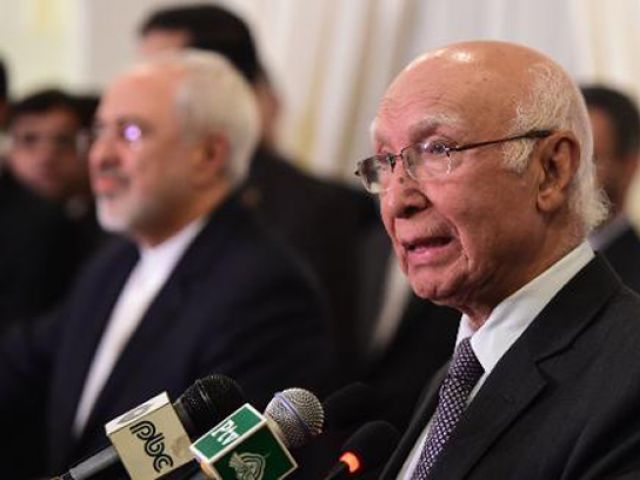 ISLAMABAD: Researchers and security experts have said that given China’s significant capacity and stakes in the region, a new concept of security has emerged. This new paradigm encourages stake holders to find solutions to non-traditional security challenges like terrorism, disaster management and water management by forming economic interdependence.

“Cooperation between Pakistan and China are focused on economic development and the mutual cooperation should not be seen as a strategic move against any other country,” said Adviser to the Prime Minister on Foreign Affairs Sartaj Aziz.

“Pakistan, therefore, seeks to establish and sustain long-term and mutually beneficial relationships with global and regional players in Asia,” he added.

Speaking as chief guest at the concluding session of a two-day international conference on “Emerging Security Order in Asia Pacific and its Impact on South-Asia,” on Wednesday, Aziz said it is unfortunate that some other countries in the region are trying to divert attention away from the importance of the China Pakistan Economic Corridor. He said India’s attempt to gain support from elements hostile to Pakistan are ill-advised.

The conference was organised by the Islamabad Policy Research Institute (IPRI), in collaboration with the Hanns Seidel Foundation (HSF).

Scholars, foreign affairs experts and strategic thinkers gathered to present research papers on the dynamics of Asia-Pacific politics, and share suggestions on potential roles that Pakistan can assume given the emerging regional alliances.

Reasserting Pakistan’s stature in the current geo-political scenario, Aziz said the country has the distinction of holding and mainstreaming strategic dialogues with both China and the US.

“For Pakistan, development of vibrant relationship with each of the world’s powers such as China, Russia and the US is seen as an important component for its security and development as an emerging economy,” Aziz said.

Speaking of Pakistan’s current position with regards to the competition between China and the US, Aziz said the country is currently focused on expanding bilateral ties with the US through joint investments in education, clean energy, technology and climate change mitigation.

HSF Resident Representative Kristof W Duwaerts said there is a need to bridge diversity in order to take informed decisions. “Security does not mean tackling traditional security issues alone, but should be viewed in light of  socio-economic and cultural aspects of the region on the whole, and countries in particular,” Duwaerts said.

Calling for the need for Asia Pacific to develop its own region, analysts discussed politics in light of China’s competing interests with the US, and how this power play needs to be addressed by countries in the region.

IPRI President Ambassador Sohail Amin announced that the papers presented during the conference will soon be published as a book along with recommendations and suggestions made by experts. Earlier, Amin had said that Asia-Pacific has undergone serious changes in the post-Cold War era, making Asia the powerhouse of global politics.