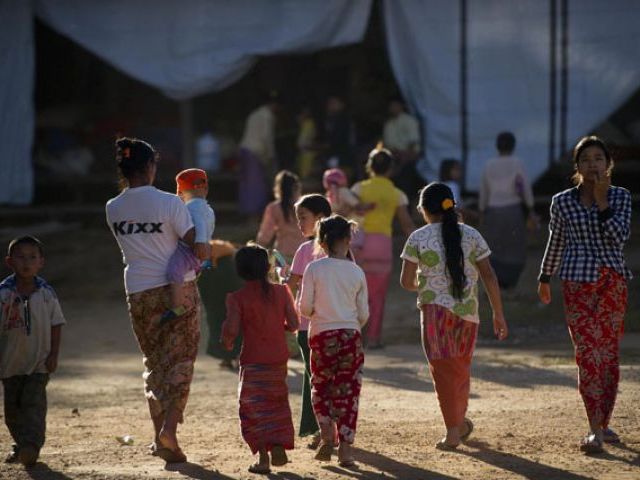 In this photograph taken on November 17, 2015, residents of Minenaung, who fled the fighting between Myanmar government troops and Shan ethnic army groups, walk around in a temporary evacuation center in a Buddhist monastery located in Laihka (148 km away from Taunggyi, city of southern Shan State) in Shan State, Myanmar. PHOTO: AFP

TAUNGGYI, BIRMANIE: Fresh fighting has broken out between the military and rebel groups in Myanmar’s north, forcing hundreds of civilians to flee less than two weeks after a historic poll victory for opposition leader Aung San Suu Kyi.

Thousands of people have been displaced in the past month by ongoing clashes between the Shan State Army-North and government forces, with the Myanmar military launching air strikes targeting ethnic insurgents.

“We didn’t dare stay as helicopters kept coming to attack,” said a 41-year-old teacher, who escaped the area with 15 other people in her car. “People were so frightened,” she told AFP at a monastery in Lecha town — some 100km (60 miles) from the fighting.

The army confirmed there was ongoing fighting in Kachin and Shan states, areas of the country that have been plagued by armed ethnic conflicts for the some 70 years since the country formerly known as Burma gained independence from Britain in 1948.

The Shan State Army-North and the Kachin Independence Army both refrained from inking the deal and have been engaged in ongoing clashes with government forces for months.

As fighting continued in the run-up to November’s landmark vote, authorities cancelled elections in seven national parliament constituencies — all in Shan — as well as suspending voting in swathes of northern Kachin state and Karen state in the east.

“There has been continuous fighting for two whole nights… Schools are closed. I left my husband behind to look after our house. I’m really worried about him,” said Pa Latt, 35, who was also sheltering at the Lecha monastery with her two sons. “I dare not to go back because we are so frightened. Helicopters are still flying around.”

The Myanmar military launched an operation targeting Shan rebels on November 10, after insurgents attacked a police station and military outpost, leaving a number of soldiers dead and others injured, according to a government statement which gave no further details.

The Shan State Army-North said the military has since launched air strikes in the area. “They are using military planes and helicopters,” Major Sai Kham, a spokesman for the Shan rebels, told AFP.

More than 100,000 thousand people have been displaced across swathes of northern Myanmar since a ceasefire between Kachin rebels and the army collapsed in 2011.