Children’s festival: A medium of learning quite unlike others

Children’s festival: A medium of learning quite unlike others 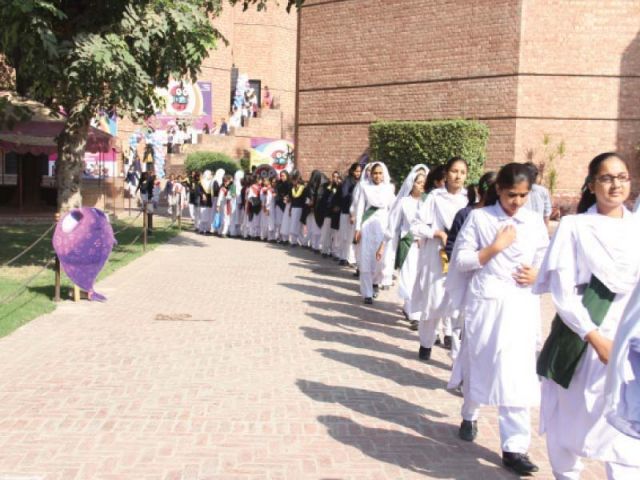 Children walk out of the hall after a movie screening. PHOTO: AYESHA MIR/EXPESS

LAHORE: Over 1,400 children have watched movies at the International Children’s Festival simultaneously underway at Alharma on The Mall and Cinepax since it commenced on Monday.

The festival—organised by The Little Art—gives children the opportunity to watch movies made specifically for them. Coming out of the screenings, the children said movies that explored relationships were the ones that had moved them the most. Student Muskan Javed of Petaloid High School said she had enjoyed the movie A Letter to the Sky the most. “I liked how when the child’s father passed away he tied a letter to a balloon and sent it to him,” she said saying the gesture had made her emotional as well.

Other children also spoke about the movie saying it had appealed them the most. Kainat Karamat, from 7th grade said the young boy was around their age and they could relate with what he had experienced. “He missed his father and wanted to see him again,” she said while explaining the part of the movie that had moved her the most.

The children felt the movies were relatable as the characters faced everyday problems that they encountered too. “One of the boys in the movie didn’t brush his teeth and ultimately his teeth got ruined,” said Mehvish Khurshid adding that this was something her mother had also warned her against.

On the second day of the festival, students from Petaloid Higher Secondary School came to Alhamra to watch the movies. The venue accommodated students from government schools and low-income private schools. The students said watching a movie on a big screen was a different experience. “I have only seen movies like this in a cinema before, never on such a big screen like this,” said Ghulam Fatima, a student of Petaloid High School.

The Little Art programmes manager Omar Ijaz Khan said the virtual impact of movies was very different from other mediums of learning. He said it went beyond the language being spoken. He said this was especially true for children coming from government schools who had not had the kind of exposure that came with watching something on a large screen.

“This is a unique experience for them and we have had some interesting feedback from them regarding the scale of the screen,” he said.

Students who had come in for the last session of school screenings in the morning did not get a chance to watch the movies. This was because the students were an hour late. The organisers only had the venue till 1. “There is another event in the hall and we will not be able to screen films today but will accommodate them tomorrow,” Khan said.

Zainab Iqbal, the vice principal of the school, said the children had been looking forward to the screening. “We will now have to figure out something else for them to placate them,” she said. Students from nearly two dozen private schools including Beaconhouse School System, Lahore Grammar School, Bloomfield Hall, Lahore School of Learning, Army Public School Azam Garrison and Beaconhouse Newlands were present at Cinepax.

The festival is open to the people during the evening and will continue till November 21 at Cinepax and November 25 at Alhamra.

Facilitating dialogue: The shadow under our flag