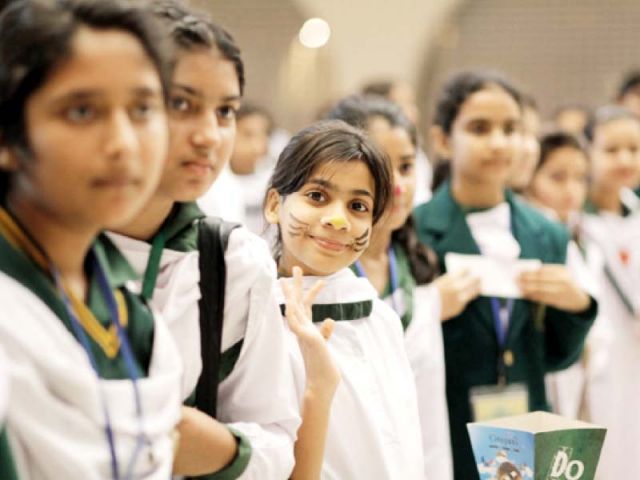 Girl students after the screening of a film at Cinepax.

LAHORE: Hundreds of schoolchildren gathered at Fortress Stadium’s Cinepax cinema and Alhamra on The Mall on Monday to attend the 7th Lahore International children’s Film Festival.

As many as 19 films were screened for children from various age groups. Some 77 films from 26 countries will be screened during the festival.

Sahar Ahmad, the festival manager and the Little Art programmes manager, said she was happy with the response. She said children from nine schools had attended the first day of the festival.

“We had full shows at all three screens at the cinema. Shows are happening simultaneously at Alhamra which is also all booked,” she said.

Ahmad said shows for various NGOs, orphanages and foundation schools were arranged at Alhamra; students from private schools had come to Cinepax. “There is no children-specific media in Pakistan as such. The festival provides a platform for children to watch films with their peers and teachers.”

Ahmad said shows for the children from the four-seven years age group were arranged in the morning and for eight years or more in the afternoon. “This makes the content age-appropriate,” she said. The festival aimed at promoting media literacy amongst the children, she said.

“The films have strong content. They depict various cultures. This gives children a small window to look at rituals and traditions of many countries, including Iran and India.”

The children were quite excited to see animated films. It was, however, Little Big George – a short film on a school boy – that stole the show. DJI: Death Sails, an animated film, too, received a huge applause.

Yashfin Jamil, a grade seven student from the Beaconhouse School System, was all praise for Little Big George. “The movie is about a school boy. He wants to become a chef when he grows up but his parents think it is a job meant for girls only,” she said. “Despite being faced with bullying friends and unsupportive parents, the boy doesn’t want to give up on his dream. The film gives a great lesson… to follow your dreams no matter whatever anyone says. It is hilarious and relates to children of my age,” Jamil said.

Maliha Khan, a grade 8 student from the Beaconhouse School System, said she had enjoyed Death Sails. “The film is super funny featuring great animation effects. It gives us the message that money is not the most important thing in the world.”

Khan said she had attended the festival for the first time. “I thoroughly enjoyed it. I want to come back the next year,” she said.

Sitwat Chughtai, an O-level teacher, too praised the festival. “I think more such festivals should be arranged. Events like this give children a great exposure. It broadens the way they think,” she said.

Diya Masood, a grade 7 student from Beaconhouse, said she was a fan of Georgy. “George is funny,” she said.

“The films on display depict much creativity. It was fun to watch them,” said Sehrish Ali, a teacher. “I wish that my own daughter should come and be part of the festival,” she said.