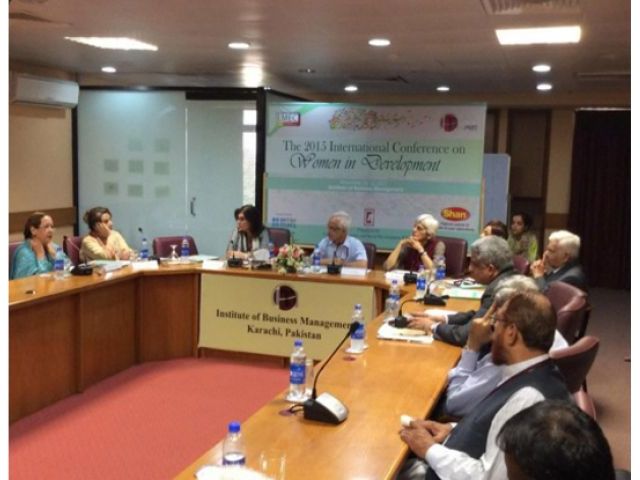 The role of women in Pakistani Media being discussed at the International conference on Women in Development 2015. PHOTO: twitter.com/IoBM_Official

KARACHI: Women are doing wonders in every field so why create barriers for them?

With this in mind, a conference was held at the Institute of Business Management (IoBM) on Wednesday on ‘Women in Development’.

The conference’s first session began with a welcome note by Talib Karim, rector of IoBM. “We are a country with a history of women participating in various fields,” he said. “Starting from Begum Raana Liaquat and Benazir Bhutto to Maliha Lodhi and Jugnu Mohsin, let me clarify that these are women who did it by themselves. Society did not help them and only a few appreciated them,” Karim claimed.

We have such brave women to be proud of and yet we kill women for not making round rotis, he lamented.

The keynote speaker, Musharaf Hai, is the CEO of L’Oreal Pakistan, a Sitarae Imtiaz recipient and was also listed as one of the 50 most influential women in the world by Fortune Magazine in 2004.

“The management of IoBM has brought men and women together and this is an excellent opportunity for men to hear what women go through and learn how to educate themselves through our problems,” she said.

A nation with a shaky economy can only rise when women and men work together, she said. These women sitting here are pioneers and role models not only for their young ones but to every single person, including men, Hai added.

“My male colleagues would bet on how long I was going to stay at OUP, since I was the only woman working there but they all lost their bets and yes I am still there,” she said.

She added that the future for women is very bright because of the increasing awareness of women’s rights nowadays. Women are coming out to earn a livelihood for themselves, which is a really good sign, she said.

Rukhsana Asghar, CEO of Fulcrum Consultants, said she knew that if one made sincere efforts in life one day they would achieve success, whether they are female or male.

Dr Rehana Kamal, dean of the faculty of anaesthesia at Aga Khan University, said she was appointed as head of the department of anaesthesia at a medical university in Jeddah where it was pretty uncommon for women to hold such positions.

“Wherever I worked, I struggled hard for the women working together with me. There was hardly any concept of maternity leave, you only had the option of resigning but my efforts were never wasted, I have always encouraged fellow women to work regardless of any hurdles,” she said.

Dr Kamal claimed that people offered condolences when she was blessed with a baby girl. “Are you mad?” she asked angrily.

“I think in Pakistan it is difficult for women to make their careers because of the conservative society but I see many women breaking stereotypes and proving themselves in every field,” said Alina S Safonova, an attaché at the Russian consulate.

Saiyid said there is vast difference between women today and those of 20 years ago and, although women have progressed a lot, if she asked any female employee to visit Peshawar, they would resign.

Absent from the event were chief guest Anusha Rehman and Shehla Raza.