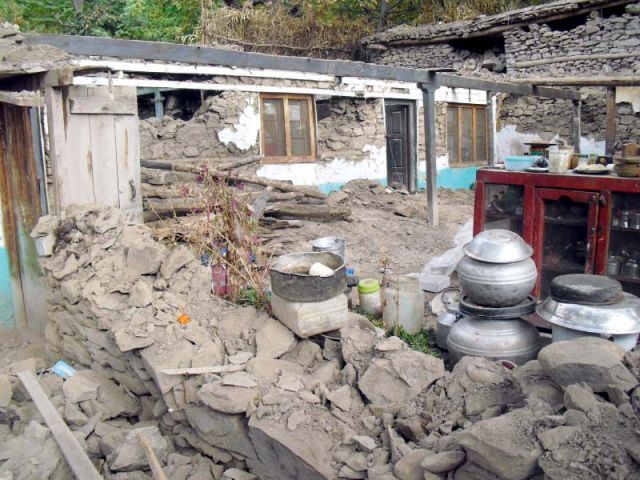 PESHAWAR / CHITRAL: A village in Chitral was razed to the ground in the October 26 earthquake. Yet the government does not count it among the affected areas owing to fewer casualties there.

Veiled by a huge mountain, the Charun Owir village in Mastuj tehsil of Khyber-Pakhtunkhwa’s Chitral district is not visible from the Chitral-Booni Road, even though it is located just 5km from the tehsil headquarters Booni.

The massive temblor that was centred in the Hindu Kush – the 800km mountain range that stretches between central Afghanistan and northern Pakistan – caused deaths and destruction in the two countries and sent shockwaves as far as New Delhi. The US Geological Survey put the quake’s magnitude at 7.5.

According to figures released by the National Disaster Management Authority, last month’s earthquake left around 280 people dead. The casualties were recorded at 232 in K-P alone, of which 32 belonged to Chitral district.

Charun Owir that once boasted beautiful meadows has been transformed by the temblor into something that now resembles the ruins of Mohenjo-daro. Of the 135 houses in the village, 120 have been flattened by the quake.

Chitral-based social worker Nasiruddin told The Express Tribune that the locals were feeling helpless. “They think there will be no future for their children.”

He said non-governmental organisations (NGOs) such as Focus Humanitarian Assistance, Falah-e-Insaniyat Foundation, Islamic Relief and Alkhidmat Foundation were providing food, water and blankets to the affected people. “The government only provided them 50 tents, 3kg rice and 2kg ghee and oil, but the people need shelter and wood for winter.” The NGOs are making efforts for setting up a shelter house that requires 50 feet of wood, he added.

Elsewhere in Chitral, the quake has left a trail of destruction particuarly in the Warijun Bala village, but the government has only been providing relief packages to the victims of Warijun Bala and Warijun Payen villages.

Chitral quake survivors help themselves in race against winter

Sifting through the remains of his belongings, 21-year-old Jehanzeb hit upon his college bag, which felt soaked because of heavy rainfall. But when he opened the bag, he found that his precious books were fine.

He has been skipping college for a fortnight, because his house was destroyed in the massive temblor and he has been living in a tent. “I am the eldest son with many responsibilities. I have been rummaging through the wreckage for food and other items, but whenever my family and I are at work, we have to endure an onslaught of downpour.”

They were given a tent, four blankets, a Tarpal and two mattresses by Islamic Relief, and another tent by the commandant of the Chitral Scouts. The blankets are not enough for the children, because they do not protect them from the cold. Jehanzeb said Prime Minister Nawaz Sharif had announced relief cheques, but they had yet to materialise.

His friends have also been displaced, but since they are taking refuge in tents near the Government Postgraduate College of Commerce, they can also find some protection inside the educational facility.