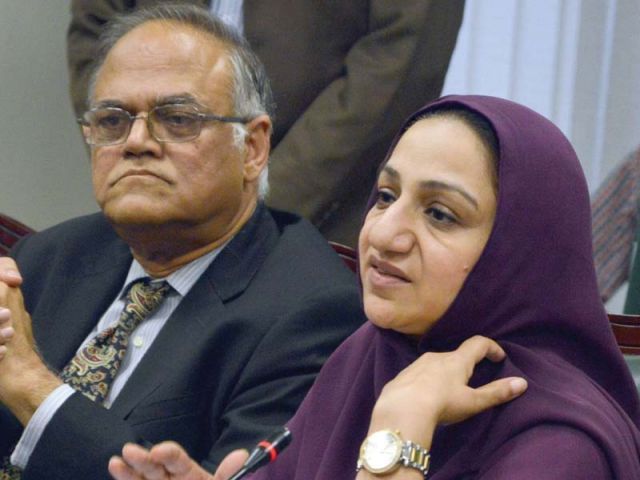 The federal health ministry is looking forward to revive the slogan ‘bache do he ache’ in order to control the rapidly increasing population of the country as it has become a challenge to achieve the target of reducing the current growth rate from 1.9% to 1.6%.

State Minister for National Health Services, Regulations and Coordination (NHSRC) Saira Afzal Tarar while addressing a news conference on Monday said that in the past this slogan helped to promote awareness among couples to have two children for the sake of having healthy nation.

The press briefing was held to share the details of the ongoing preparation for a two-day National Population Summit 2015. which is scheduled for November 5.

Though in the past the slogan was not welcomed by many but at least it had an impact on couples to plan small families through proper birth spacing, said Saira Tarar. “In Pakistan there are many people who are allergic to this slogan and unlike China, Pakistan cannot even have the policy to have two children.”

She said pointed out: “Our population has grown rapidly more than six times since our independence and today we are the sixth largest country in the world which is worrisome and alarming.”

Karachi population to increase by 50% in 15 years

Expressing grave concern over the country’s population, the state minister said currently it cannot be compared with any regional or Muslim countries in terms of population growth. “A key reason why Pakistan is lagging behind in most regional and Muslim countries in terms of completing its demographic transition and improving its reproductive health indicators has been wavering of political commitment and unsustained support by the past governments to the population issue.”

She added: “It is painful to see that a mother dies while giving birth to her fourth or fifth baby due to complications or poor health. Her death also deprive her other children from mother’s love.”

According to her majority of the issues that the country is currently facing such as unemployment, low literacy rate, poverty, shortage of hospitals and schools among others are directly or indirectly linked to the rapidly increasing population.

The National Population Summit is going to be organised by the ministry of NHSRC in collaboration with the Ministry of Planning, Development and Reforms, Population Council and supported by UNFPA, Packard Foundation and Gates Foundation.

It will be attended by about 500 delegates from across the country and some 25-30 foreign participants.

“In the summit, we also intend to announce a change in the narrative we have used for explaining the population issue confronting Pakistan,” Saira Tarar said, adding, “In the past, the advice to have fewer children has been incorrectly perceived as part of a western agenda to reduce the size of the Muslim Ummah.”

After consultation with all the participants, a strategy will be formulated to control the growing population which later will be effectively implemented by all the provincial governments, she added. “It is because population welfare has become a provincial subject after the devolution of Ministry of Health under the 18th Amendment.”