Faiz International Festival kicks off in Lahore on November 19

Faiz International Festival kicks off in Lahore on November 19 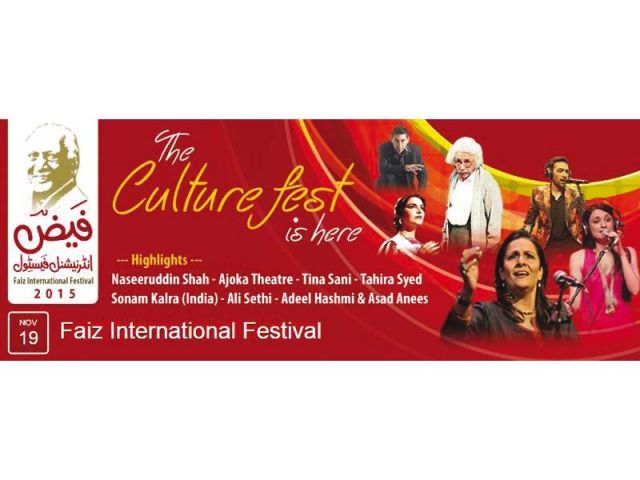 The event will be held simultaneously at Alhamra Halls and Falettis Hotel in the city. PHOTO: PUBLICITY

It has been 31 years since towering litterateur and activist Faiz Ahmed Faiz left us. While his legacy is honoured every year, this time around, his progeny has pieced together the Faiz International Festival to mark his 31st death anniversary. Beginning November 19, the four-day event will be held simultaneously at Alhamra Halls and Falettis Hotel in Lahore.

Spearheaded by the Faiz Foundation, the event is being put together to forward the cause of establishing the Faiz Cultural Centre in the city. Talking to The Express Tribune, Faiz’s daughter Moneeza Hashmi explained the intention behind setting up the centre. “It will serve as a community space for Faiz’s followers. While Lahore’s facelift is being prioritised, we urge Punjab Chief Minister Shahbaz Sharif to provide for this project too,” she said.

Esteemed literary personalities from India, Russia, France, the United Kingdom and other countries are expected to fly in to moot Faiz’s incredible contribution. The Punjab CM will inaugurate the festival, while veteran Indian actor Naseeruddin Shah, who recently spoke out against growing intolerance in India, is also expected to participate in four theatre plays as part of the event. While the situation across the border might still not be good for Pakistani artists, Shah’s arrival in the country will be a major highlight of the commemoration.

An official of the foundation said, “Shah will not just perform in the dramas but also visit universities to address speaker sessions regarding Faiz and will be accompanied by several other Indian notables.” Faiz’s descendants, the Hashmis, will actively participate in the discussions. He added that apart from this, a grand mushaira is also being organised, where renowned poets from either sides of the border will participate. “Ajoka Theatre is also working on a play on Faiz’s life behind bars.”

Hashmi said invites for the festival have been sent out to people from all walks of life, including famous litterateurs. “We will have drama, music and poetry sessions. Guest lectures will be addressed by notable national and international personalities.” With a little over a fortnight left for the event, preparations are currently under way to ensure the seamless flow of the four-day festival, which will feature orchestral readings, exhibitions, poetry meetings and even a puppets workshop for children.

The Faiz Foundation has been organising events in the great poet’s name for many years and, with the festival, it aims at taking its cause to the international level. In the past, residents of the city have thronged to these events in huge numbers and it is expected that the number will only increase this year.

Faiz was an influential left-wing intellectual and revolutionary poet, who wrote in Urdu, Punjabi and English. Having received the Lenin Peace Prize in 1962, he was nominated for the Nobel Prize for literature four times.