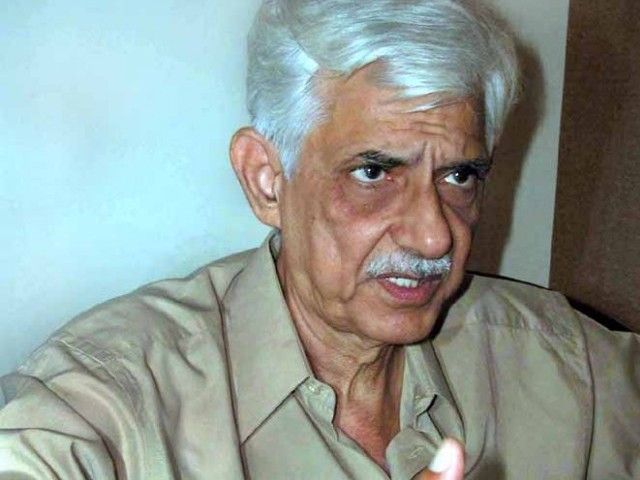 Senator Taj Haider of Pakistan Peoples Party (PPP) is all set to introduce a bill aimed at further tweaking the National Accountability Ordinance, 1999 on the first day of the 121st session of the upper house of parliament on Monday (today).

The proposed amendment will be moved as a private-member bill seeking to limit the centre with regard to laws on anti-corruption to the extent areas/departments which come under its jurisdiction, instead of provinces as federal law prevails in the event of a conflict with the provincial law.

The ulterior motive for the move might be the recent accountability campaign in Sindh where the PPP was put under the scanner but Haider had something else to say that the existing scheme undermines the provincial autonomy.

“The legislation is aimed at deleting/omitting the inconsistencies from the laws [anti-corruption] under which the centre can also take action in the affairs of the provinces,” the PPP senator told The Express Tribune.

The centre and provinces are legislating over anti-corruption and both should have their own laws, he added.

Referring to Article 145 of the Constitution [Power of President to direct Governor to discharge certain functions as his agent], Haider said: “We wanted to have separate laws for the provinces”.

“The existing scheme undermines the provincial autonomy as promised by the 18th Constitutional Amendment,” he pointed out.

The senator said that his party is all set for the legislation to have Accountability Bureau for Sindh, adding that the bill is likely to be introduced in the next session of the provincial assembly.

Don’t burden culture with the task to save Pakistan: Sherry Rehman

In order to substantiate his point of view, he quoted section 56 of the Khyber-Pakhtunkhwa Ehtesab Commission Act that reads:  “Harmonious interpretation with other laws. An effort shall be made to interpret this Act harmoniously with other federal laws on the subject, provided that in the event of a conflict between this Act and a federal law, the provisions of the federal law shall prevail.”

Meanwhile, Sassui Palijo, another PPP senator, would introduce a resolution among four others, which after passage are non-binding, stating: “This house recommends that the government should include the Keti Bunder Port, Sindh in the CPEC in the light of Articles 37 and 38 of the ‘Principles of Policy’ of the Constitution as discussed by the CPEC Special Committee and its recommendations for reducing the gap between the developed and underdeveloped areas of Pakistan. Connecting the Keti Bunder Port to Karachi-Lahore Motorway would give an unprecedented boost to the national economy due to it being a deep sea port, close proximity to Karachi and direct access to Thar coal project.”

Other agenda matters include discussion on earthquake as the minister in-charge of climate change will present a report regarding the relief work and other subsequent steps taken by the government in the wake of 26 October devastating earthquake.

The house will also discuss the issue of LNG import in the country and the agreements made or proposed to be made in this regard on a motion moved by PPP Senator Saeed Ghani.