In Sukkur, the PPP won 18 seats of its munici­pal corpor­ation, while three seats were grabbe­d by the MQM
By Sarfaraz Memon / Hafeez Tunio / Photo: Naeem Ghouri
Published: November 1, 2015
Tweet Email 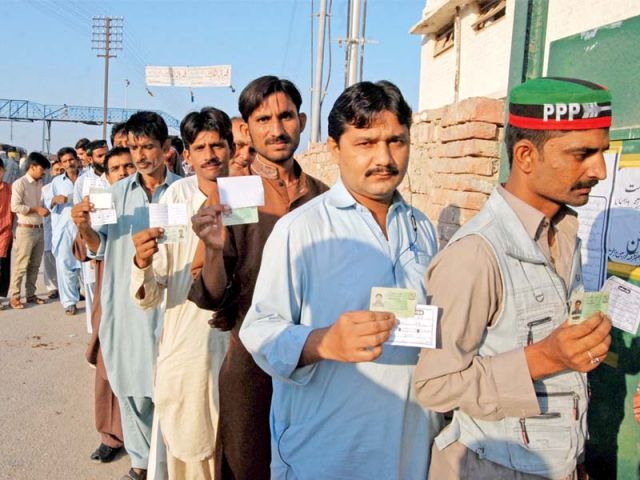 Men queue up outside a polling station in Sukkur to vote. PHOTO: NAEEM GHOURI/EXPRESS

The Pakistan Peoples Party (PPP), the ruling party in Sindh, made a clean sweep in the first phase of the local government elections held in eight districts of Sindh –Sukkur, Khairpur, Ghotki, Shikarpur, Jacobabad, Kashmore-Kandhkot, Larkana and Qambar-Shahdadkot – on Saturday.

Most of the results were not announced till late in the night. However, according to the results collated unofficially the PPP bagged 400 seats, followed by independent candidates with 100 seats, Pakistan Muslim League-Functional (PML-F) 30, Muttahida Qaumi Movement (MQM) and Jamiat Ulema-e-Islam-Fazl (JUI-F) three seats each while the Pakistan Tehreek-e-Insaf (PTI) could grab only 2 seats.

In Sukkur, the PPP won 18 seats of its municipal corporation, while three seats were grabbed by the MQM and five by independent candidates. PPP candidates emerged victorious at nine out of the 10 wards of Rohri town. One seat was bagged by an independent candidate, according to the unofficial results announced till midnight,

In Ghotki, the actual contest was between Mahar Group and Lund Group. According to the reports, Mahar Group made a clean sweep in Ghotki, Mirpur Mathelo and Khangarh talukas, while in other talukas – Daharki, Ubauro, Khanpur Mahar – Lund Group and independent candidates reportedly bagged most of the seats.

In Kashmore-Kandhkot, the PPP was divided into Sundrani Group and Bijarani Group. A couple of seats were bagged by the Jamiat Ulema-e-Islam-Fazl (JUI-F) and independent candidates, while the others were grabbed by the ruling PPP.

In Shikarpur Municipal Committee, the PPP conceded 10 seats to the PML-F, while in taluka Lakhi Ghulam Shah, Ghuas Bakhs Mahar Group secured most of the seats in a major setback to the PPP. In Garhi Yasin, Khanpur and other talukas, most of the seats were bagged by the PPP.

According to the unofficial results from 28 out of 31 wards of Jacobabad municipal committee, the PPP won 23 seats, one seat was won by the Pakistan Muslim League-Nawaz (PML-N) and four by independent candidates.

All the seats of town committees Garhi Khairo, Mir Pur Buriro and Garhi Hassan Sarki had already been won unopposed by the PPP candidates. Results of the union councils are still awaited, as these are situated in far flung rural areas.

According to initial results of Larkana and Kamber Shahdadkot districts, the ruling party was given a tough time, especially in urban areas.  In Larkana, PPP’s rival panel ‘Larkana Awami Ittehad’ won many seats in UC II and III.

The PPP also suffered a seatback in a few other town and municipal committees in both the districts where independent candidates dominated. At town committee Qubo Saeed Khan of Kamber Shahdadkot, a constituency of PPP MNA Faryal Talpur, the PPP could get only one out of four seats.

The PPP also lost many seats in neighboring town including Miro Khan that was considered its bastion.  Also in Dokri town committee, the PPP candidates could only win one seat as they conceded three seats to independent candidates belonging to Unar family of the area.   In Kamber, Shahdadkot and Warrah Tahsils, the PPP swept the election.