Till divorc­e do us part
By Entertainment Desk
Published: October 30, 2015
Tweet Email 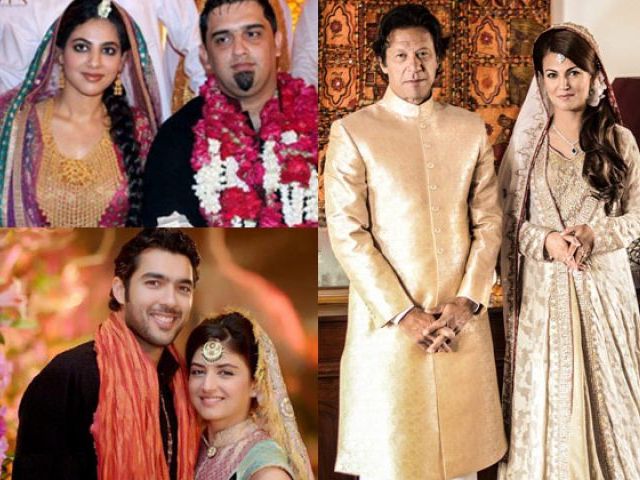 Till divorce do us part

Marriage is a beautiful union of two people but not everyone is fortunate enough to be blessed with a happily-ever-after in spite of good intentions.

We present to you the five short-lived celebrity marriages that made headlines:

Our most-loved tennis player Aisam-ul-Haq married clinical psychologist Faha Makhdum in 2011 in an elaborate wedding ceremony. The two looked adorable together, and no one could’ve guessed their marriage would end in divorce. But it did. Shortly after the marriage, rumours began circulating that the two were planning to separate. Although the couple and their families denied it initially, eight months later the inevitable happened. Both sides refused to comment on the matter and didn’t divulge into details.

It was one of the most shocking celebrity divorces and many were left heartbroken after hearing the news.

Annie’s first marriage looked promising. The singer got married to Dubai-based businessman Malik Noureed Awan and seemed happy and in love. Unfortunately, bad news followed as within six months of their marriage Annie fled to London claiming she was domestically abused by her husband.

Safe in the UK, singer Annie Khalid says no one to hold her back now According to Malik, the pop singer ran away with Rs10 million in cash and Rs40 million worth of jewelery from the couple’s home in Dubai. Annie denied all such claims saying she ran away in order to save her life.

Things took an ugly turn when Malik turned to social media to humiliate the singer: It took one tweet and bhabi was bhabi no more. In a sad turn of events, PTI chairman Imran Khan and his wife of 10-months Reham Khan officially called it quits.

We have decided to part ways and file for divorce.

The couple got married in January 2015 in a simple ceremony at Imran’s Islamabad home. It was their second marriage. According to a PTI representative, the couple decided to divorce with mutual consent. Imran’s supporters were devastated:

The reality TV star and NBA basketball player said ‘I do’ in an elaborate and over-the-top wedding, It was a grand and star-studded event, one which everyone thought be be remembered for times to come.

Kim Kardashian: Till divorce do us part But if there’s one thing the world knows about the Kardashians, it’s that there’s always drama. After just 72 days of marriage, Kim filed for divorce citing “irreconcilable differences”.  Humphries was devastated when he heard the news. Kim claimed she rushed into the marriage “for love” and “got caught up with the hoopla”.

Probably the shortest celeb marriage in history, Britney got married to her childhood friend Jason Alexander in Vegas. However, their happily-ever-after moment lasted a total of two days, after which the couple filed for divorce. The two claim that the spirit of Sin City led them to the aisle.

End of the ball game for Bari Studio?