‘The PML-N trying to coerce us into boycot­ting the electi­on’
By Our Correspondent
Published: October 28, 2015
Tweet Email 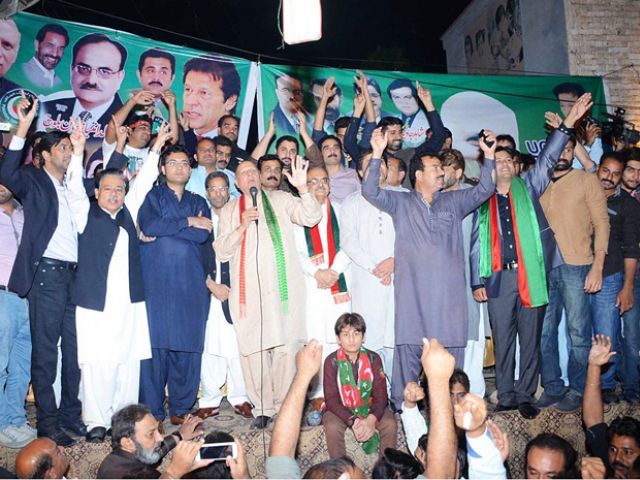 This is reason enough for seasoned politicians to join the PTI,” Sarwar said PHOTO: ONLINE

LAHORE: Pakistan Tehreek-i-Insaf will not boycott local government elections even though the Pakistan Muslim League-Nawaz has tried its best to harass its workers out of the running, PTI Punjab Organiser Chaudhry Muhammad Sarwar said at a press conference on Tuesday.

The press conference was held at the chairman secretariat. Sarwar welcomed 25 former members of the PML-N and the Pakistan Muslim League-Quaid – including former MPAs Khalid Pervez Virk and Irfan Bashir Gujjar – to the PTI.

“The masses are tired of the PML-N’s blundering performance,” he said.

“This is reason enough for seasoned politicians to join the PTI,” Sarwar said.

The PTI leader said instead of empowering the masses, the local government system in the Punjab had only strengthened those in power. “This system is a farce.”

He said the PTI would strongly oppose any attempts to delay or manipulate the elections and reiterated that the party would not abandon the electoral field. “We have reached every corner of the province and there is nothing that could deter us from contesting the elections,” he said.

Sarwar said that the PML-N was contesting the elections with the support of the Punjab police, state machinery and public funds. He said nowhere in the world are public servants allowed to campaign for a political party.

“The PTI has scheduled a meeting with the ECP in which we will inform them about violations of election rules by the PML-N.”

Sarwar said that the commission would also be given evidence of utilisation of public resources in election campaigns.

He claimed that there was a difference of at least a hundred voters in the polling scheme and the lists that were provided to their local government candidates. “The election commission must provide our candidates complete voter lists prior to the polls,” he said.

To a question about the Yakki Gate incident in which two PTI workers died, Sarwar said it was obvious that the PML-N was employing manipulative tactics.

“They want us to boycott the polls,” he said. “However, we will not be swayed.”

Sarwar said the PML-N does not learn from its past and continues to use the same old tactics to suppress the voice of its opponents.

Lone soldier: The only PML-N woman vying for chairmanship