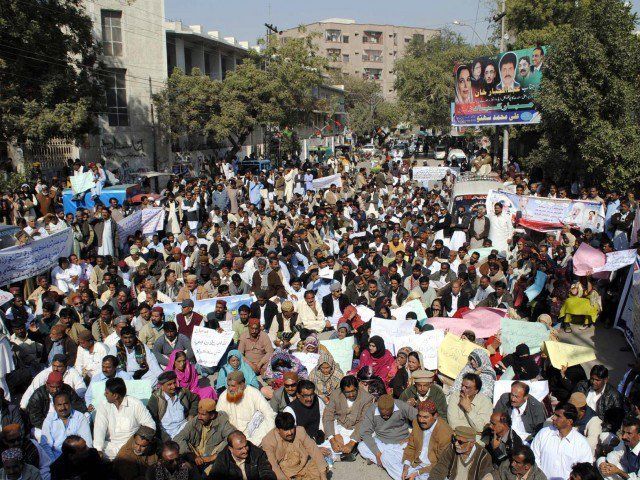 SUKKUR: The Primary Teachers Association (PTA) has decided to boycott the upcoming local government elections and not perform duties during the elections.

The decision was taken by the PTA after their demands were not fulfilled by the government, while several primary school teachers also staged demonstrations in Sukkur and Larkana on Tuesday. The protesters shouted slogans against the Sindh education secretary Fazlullah Pechuho and asked the government to accept their demands.

Speaking to The Express Tribune, PTA Larkana chapter general secretary Muhammad Aslam Dadar alleged that the Sindh government is ready to fulfill their demands, but Pechuho is not ready to implement those decisions. Aslam said that the teachers appointed in 2010 were still not regularised, while those teachers who were appointed eight months ago, after clearing the national testing service, are still waiting for their salaries.

The PTA general secretary added that the 25 per cent quota policy for promotions of the primary teachers is not being implemented. “The education secretary has also issued orders to block the ID code of hundreds of teachers, due to which they are not getting salaries,” said Aslam.

Action committee chairperson and central president Liaquat Ali Dadar also held the education secretary responsible and said that he has stopped salaries of many teachers across Sindh.

“We always perform the duties in elections and we are ready to perform our duty now, but the government will have to remove the education secretary and fulfill our demands first,” said Liaquat, adding that they will stage a protest outside Zardari House in Shaheed Benazeerabad on Wednesday.

In protest: Teachers to boycott classes in Sindh’s varsities

For his part, the education secretary said that they had stopped the salaries of only those teachers whose appointments were found to be fake and those who remained absent from duty. The majority of these fake teachers were appointed in 2012, during the tenure of Pir Mazharul Haq, he claimed, adding that even the court had ruled that these were illegal appointments.

Pechuho added that after the installation of the biometric system, the ghost teachers and absentees had become apparent, which is why they had resorted to blackmail. Speaking about the teacher’s decision to boycott the election duties, Pechuho said it wasn’t his job to enforce the election duties on the teachers.