It was expect­ed that once Modi gained power throug­h electi­ons, he would pursue the Hindu agenda­
By Shahid Javed Burki
Published: October 25, 2015
Tweet Email 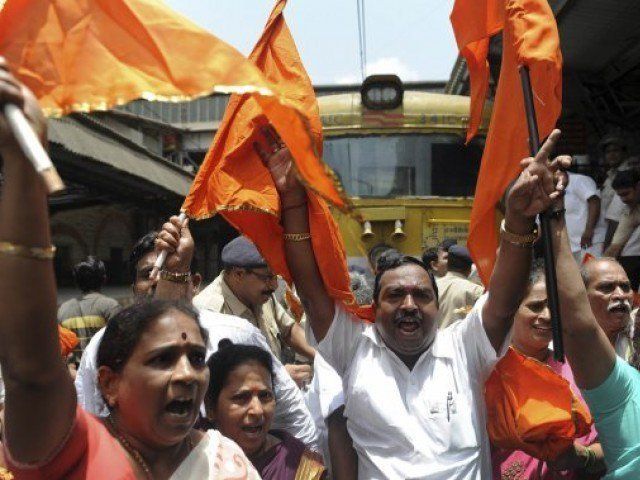 The world needs to take notice and India should start to worry. A number of recent unpleasant incidents have involved the members of the Hindu nationalist Rashtriya Swayamsevak Sangh, or the RSS. They were aimed at humbling the Muslim minority in the country. These events seem to indicate that the country now faces an extremist challenge. It would be tempting to compare the developing Indian situation with the one Pakistan faces. However, it would be a mistake to equate the two situations. To begin with, Pakistan has, in the form of the National Action Plan, a better understanding of the problem and how it might be resolved. The same recognition has as yet to lead to the formulation of an appropriate public policy response in New Delhi.

Let me begin with a brief history of the RSS. It was founded in 1925 by Keshav Baliram Hedgewar, a physician, who lived and practiced in what was then the Bombay Presidency of British India. This region has now been renamed Maharashtra and is the centre of the RSS. The original purpose of the organisation was to challenge British rule by adopting Hinduism as the basis of opposition. The RSS did not buy the approach adopted by the leadership of Indian National Congress (INC) of using the instruments that were part of the Western political order to gain independence. In fact, the principles and practices of Western liberal democracy also informed the style of campaign followed by Muhammad Ali Jinnah and his All-India Muslim League (AIML). The INC was prepared to use civil disobedience as an instrument for applying pressure on the British rulers. Its leaders were prepared to court arrest and fill Indian jails while Jinnah and the AIML confined their campaign strictly to the accepted approaches.

The RSS chose to operate very differently. Its focus was on inculcating Hindu values among its followers. Drawing on what it saw as the approach followed by the extremist nationalist groups such as the Nazis in Germany, it imparted military and physical training to those who joined the organisation. The idea behind this was to develop the capacity to physically confront the British to force them to leave the subcontinent. Once that happened, India would be turned into a Hindu state. However, the liberals won the day. They were able to persuade the British to leave India in the hands of the Indians. Much to the disappointment of the Hindu nationalists, M K Gandhi and Jawaharlal Nehru conceded Jinnah’s demand for the creation of a separate Muslim state.

Some political scientists such as Subarata Mitra have suggested that by allowing the AIML to leave India, it became possible for the leaders of the new country to create a liberal democratic order for the nation-state they had inherited. According to this interpretation, the Muslim League’s continued presence in an undivided India would have deflected the making of the country’s constitution into providing special rights for the Muslim community, which then constituted a bit more than one-quarter of then British India’s total population. With a large chunk of the Muslim population gone into the newly created state of Pakistan, India’s constitution-makers could focus their attention on equal rather than special rights.

The Indian Constitution is one of the most liberal governing documents in the emerging world. It grants equality to all citizens no matter their religion, caste or creed. That said, it also recognises that there is a class of citizens who need “affirmative action” to help them catch up with those Hinduism had granted a higher status. There were a limited number of special rights given to the Muslim minority as well. They were allowed to follow their own family laws.

Some of these provisions went against the belief system of the RSS. Since Narendra Modi had cut his political teeth as an RSS member, it was expected that once he gained power through elections, he would pursue the Hindu agenda. This the new prime minister has not done in an open way. He has indicated through his actions, although not through his words, that he was unlikely to follow the RSS agenda. Thus disappointed, the members of this powerful organisation have decided to take matters into their own hands. They are enforcing some deeply held beliefs by resorting to violence. There have been murders of Muslims accused of eating beef; in one particular case a man was killed since he was transporting cows the attackers believed were bound for the slaughter house. Prime Minster Modi has not used the bully-pulpit to denounce this kind of violence, fearing that strong words from him would further antagonise his support base. It is now clear that India is heading towards a major crisis.

The RSS demands concern not only the “holiness of the mother cow”, it also wants those who converted to other religions to return to the Hindu fold. It wants all symbols of the Hinduism — and the religion is full of symbols, including the pictures and figurines of major and minor deities — to be protected by law. An Australian visitor was attacked since he had the head of a Hindu deity tattooed on his body. Suddenly, India is faced with a problem that runs deeper than the one Pakistan faces in terms of dealing with extremism. The developing situation in India will have profound consequences for South Asia.