No pain, no gain: Creating our own Arnolds

No pain, no gain: Creating our own Arnolds 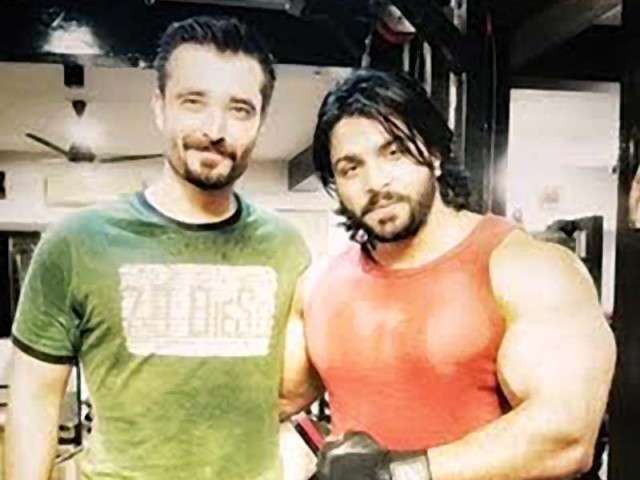 Mehmood is helping Hamza work on muscle symmetry, proportion and endurance for his role in Maula Jutt. PHOTOS: FILE

As the Pakistani film industry emerges from its cocoon of monotony bit by bit, multiple aspects of film-making have also begun to evolve side by side. Acting in tent-pole projects that focus on warfare or historical epics are easy to envision and harder to execute since transforming oneself in light of the film’s aesthetic requirements is a painstaking task. And by transformation we are specifically referring to the body.

In the recent past, films like Waar have given birth to fabled soldiers whose grit is invincible. They are outstanding marksmen, unbeatable when it comes to hand-to-hand combat. With another war epic, Yalghaar, in the pipeline, the body transformation of its key actors – Umair Jaswal, Bilal Ashraf and Ali Rehman Khan — is all the rage on social media these days. A lot of sweat and blood has been put into making these outstanding strong men look dapper on screen, and this is where methods of people like Hassaan Mehmood work their magic. A fitness expert and a transformation manager, Mehmood never ventured into media consciously. His journey into the limelight began the day pictures of his friend Jaswal’s shredded torso took social media by storm. “Had it not been for Jaswal’s commitment, I and my mentor Imran Khan would never have been able to transform him into the awe-inspiring Special Services Group commando for Yalghaar,” he tells The Express Tribune.

Mehmood says several others like Ashraf, Rehman and actors like Hamza Ali Abbasi and Imran Abbas soon followed Jaswal’s footsteps. “Their dedication is unreal and discipline unquestionable. The audiences are in for a surprise.” Abbasi has come to Mehmood’s doorstep for his role in Bilal Lashari’s upcoming project Maula Jutt. “I don’t have the liberty to speak much about Hamza’s role but to cut it short, he is starring alongside many other famous actors in the remake of the 1979 classic.” He is helping Abbasi work on muscle symmetry, proportion, endurance and cardiovascular health.

The laborious task requires gruelling workout routines as well as a controlled and time-based diet plans. “I take individuals according to their needs, focusing on weaknesses and at the same time, accentuating their strengths. They have to undergo hardcore workouts, so much so that sometimes, they even pass out.” Born and raised in Dubai, Mehmood grew up as the exact opposite of the mould he shapes his clients into. “I was a weak and skinny boy by birth. I also had traits of aggression in me. A psychiatrist suggested physical activity for modifying my behaviour and there began my journey”. Mehmood believes this one change helped him channelise his energies and helped him build his confidence. “When I started in 2010 at the age of 18, I barely weighed 100 pounds. Yet, my body adapted to the strain instantly.”

Within six months, he was good enough to bag the Jr Mr Capital Zone title. “In the same year, I also won the most coveted title in the field, Jr Mr Pakistan.” Soon after, accolade followed accolade and Mehmood continued to grow, quite literally. “In 2012, I made my senior class debut and competed against those almost twice my age.” Despite sustaining a hairline fracture on his left shoulder, he finished as the runner-up. Although the fracture has stayed with Mehmood till today, never once did it get the better of him.