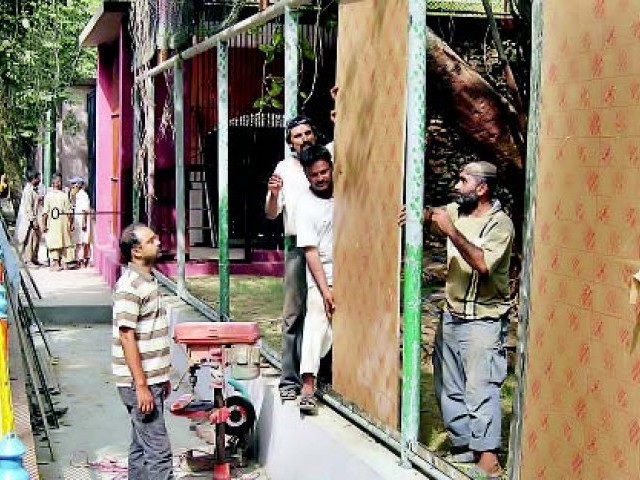 The quarantine at the veterinary hospital of the Karachi zoo, which has remained non-functional over the past decade, is all set to be inaugurated on October 15 (tomorrow).

The area was supposed to house sick animals with contagious disease separately. However, according to the zoo staff, the construction of the quarantine was never completed due to lack of funds and interest on the part of the Karachi Metropolitan Corporation (KMC).

The construction of the quarantine near the veterinary hospital has now almost been completed. “The construction and development of the quarantine is being funded under the Annual Development Programme (ADP) of the government of Sindh,” said the director of the Karachi Zoological Gardens, Muhammad Faheem Khan, adding that it was needed for the treatment of the animals.

According to Khan, the staff of the Karachi zoo had been trying to get the construction of the quarantine completed since long. He added that the staff proposed the need to KMC officials who, in turn, acknowledged the need and sent the proposal to the Sindh government.

Speaking about the animals, the director told The Express Tribune that all the animals currently at the zoo were healthy and none was in a need to be shifted to the quarantine.

The new quarantine is being constructed next to the veterinary hospital. It is spread on an area of 50×43 feet and consists of eight large cages. Around seven small cages are also being separately constructed while two storerooms are being built to stock food items and medicines for the animals.

“Four cages are for the big carnivorous animals and four are for the smaller ones,” explained a zoo staffer, Aijaz. He said the seven small sections will be used for animals that will need to stay away from other animals for a longer period of time.

On the back side of the quarantine, a large area is devoted for herbivorous animals. With the aim of keeping animals safe, the roof of this area is being made with a special net so that no flies can enter and harm the animals.

Use of the quarantine

According to Aijaz, any animals that need treatment are brought to the zoo hospital. If any of these animals has a disease like skin infection, not only will the animal feel sick but the disease might spread to other animals as well, he said. “Animals with diseases like skin infections can get better treatment in the quarantine and other animals will also remain safe.”

Talking about where such animals were kept during the time the quarantine was dysfunctional, a female staffer said the cages at the Karachi zoo already have a small quarantine area. “But a large and separate quarantine was needed next to the hospital just like other zoological gardens around the world have.”

Meanwhile, there is a shortage of workers at the zoo. “The old staff has retired and only 22 zoo keepers are working here for 107 cages,” said Khan. “Now they would have an extra burden to look after the animals being kept in this area.”