Bismah Maroof scores 92, bags a wicket for the player of the match award
By Sports Desk
Published: October 4, 2015
Tweet Email 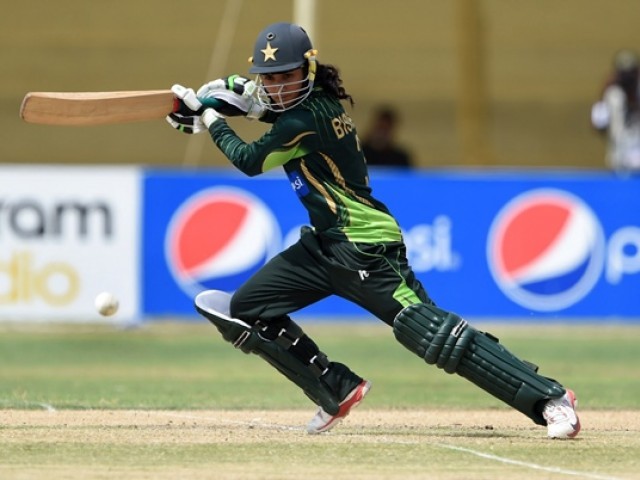 Bismah was the stand out player for Pakistan. PHOTO: AFP

Pakistan women’s cricket team, after whitewashing Bangladesh in the two-match T20 series, bagged a 1-0 lead against the visitors after beating them by 21 runs in the first of the two-match ODI series.

After winnings the toss and electing to bat first, Pakistan’s star all-rounder Bismah Maroof scored 92 runs off 128 balls courtesy eight boundaries to help the hosts post a total of 214 runs.

Nain Abidi was the other main contributor with a 27-run innings off 45 balls. Bangladesh women’s team captain Salma Khatun accounted for three Pakistan willow-wielders giving away just 31 runs in her 10 overs.

In their chase, Bangladesh kept losing wickets at regular intervals but made sure they played the full 50 overs for the loss of nine wickets. Rumana Ahmed was the top-scorer with 70 runs off 97 balls. Anam Amin bagged three scalps for Pakistan.

Meanwhile, Diana Baig, who is also a professional footballer and represented the Pakistan women’s football team in the SAFF games, debuted today. For Bangladesh, Nahida Akter was given the debutante cap.