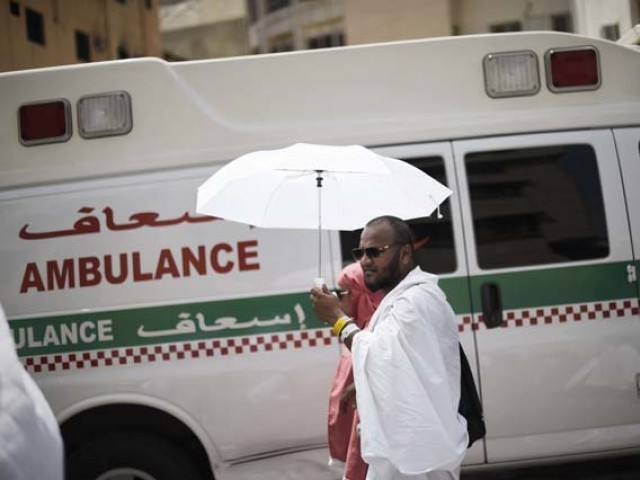 Saudi ambulances arrive with pilgrims who were injured in a stampede at an emergency hospital in Mina, near the holy city of Mecca, on the first day of Eidul Azha on September 24, 2015. PHOTO: AFP

A convoy of the son of the Saudi King Salman bin Abdulaziz prompted the stampede that killed hundreds of pilgrims in Mina on Thursday, Iran’s Press TV reported.

Citing a report published in a Lebanese daily, Press TV claims the convoy of Prince Mohammad bin Salman Al Saud played a central role in the deadly crush on the third day of the annual Hajj pilgrimage.

Report claims Prince Salman was accompanied by a huge entourage, including 200 army and 150 police officers, which prompted officials to change the movement of pilgrims.

It further said the prince and his entourage swiftly abandoned the scene, adding that the Saudi authorities seek to cover up the entire story and impose a media blackout on Salman’s presence in the area.

However, officials in Saudi Arabia have denied the report, calling it “incorrect.”

Saudi Health Minister Khalid al-Falih said an investigation would be conducted rapidly and a final toll of dead and wounded calculated. At least 863 pilgrims were injured.

“The investigations into the incident of the stampede that took place today in Mina, which was perhaps because some pilgrims moved without following instructions by the relevant authorities, will be fast and will be announced as has happened in other incidents,” Falih said in a statement.

Earlier on Thursday, accusing Saudi Arabia of safety errors, the head of Iran’s Hajj organisation, Said Ohadi, said that for “unknown reasons” two paths had been closed off near the scene of the symbolic stoning of the devil ritual where the accident later took place.

“This caused this tragic incident,” he said on Iranian state television. Ohadi said the path closures had left only three routes to the area where the stoning ceremony was held.

“The incident shows mismanagement and lack of serious attention to the safety of pilgrims. There is no other explanation. The Saudi officials should be held accountable.”

The article originally appeared on PressTV