In a candid chat, Sherry Rahman tries to clear the mist of confus­ion around the party’s polici­es
By Irfan Ghauri
Published: September 21, 2015
Tweet Email 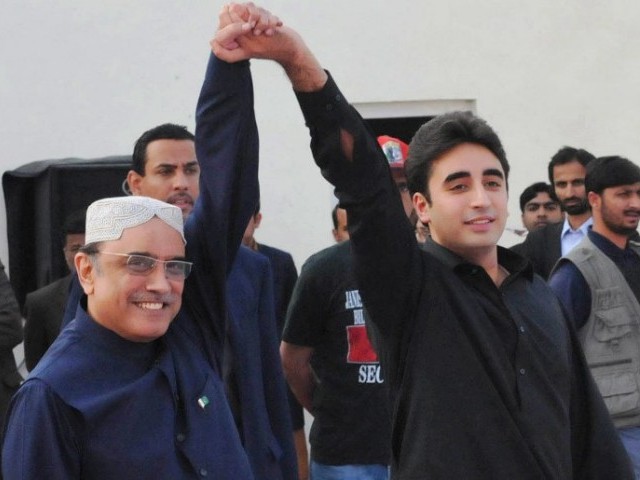 ISLAMABAD: Beset with charges of corruption and flagrant mismanagement in Sindh, the Pakistan Peoples Party, which had coalition governments at the centre and in three provinces from 2008 to 2013, is in hot water. And many within the PPP believe a change of command could salvage their foundering party.

According to them, a real transition – from Asif Ali Zardari to his son and scion of the Bhutto family Bilawal Bhutto-Zardari – could help revive PPP’s sagging fortunes. They argue that Zardari’s ascendency in the PPP following Benazir Bhutto’s assassination in 2007 was a stop-gap arrangement since the heir apparent of the Bhutto dynasty, Bilawal, was a teenager at that time.

Within the PPP, these meek yet dissenting voices over Zardari’s style of politics – running the party through a boatload of handpicked aides – are rising to a crescendo. Nawabzada Ghazanfar Gul, a diehard jiyala from Gujrat, has recently joined this chorus of dissent. He calls for giving Bilawal a free hand and asks him to flush out ‘tainted elements’ from the party, if he intends to save the party of his grandfather and mother from ruination.

Ostensibly, PPP’s top leadership has no quick fixes to offer to such ‘cynical’ workers. Sherry Rehman, an eminent journalist-turned-politician who is counted among the policymaking clique of the PPP, doesn’t agree that Zardari alone is calling the shots in her party.

“I think the party has never been led by one leader as such. It’s always been a collegial style of ownership and stakeholders. That’s how this party has always been. It runs through its provincial presidents, its members, its CEC and its core committees,” says Rehman, now a senator and vice president of the PPP.

“That’s how he [Bilawal] also really looks at leadership and that’s his leadership model. Obviously, he needs to build a new team, but he is very keen to use experience, the acumen of his father and rest of his older party members. He wants to keep that along and wants to carry the old with the new”.

Rehman was made information minister when the PPP came to power after the 2008 parliamentary elections. However, she was among the few cabinet members who had relinquished their offices over policy differences – a rarity in Pakistani politics – after the first few months of the PPP’s rule. She was called in again at a challenging time to replace Hussain Haqqani as Pakistan’s ambassador in Washington, after he was forced to quit over the infamous Memogate scandal in 2011.

Rehman had co-authored the party’s manifesto with the chairperson which Benazir had unveiled in 2007 before her assassination. She had also authored PPP’s manifesto for the 2013 elections while she was still Pakistan’s envoy to the US.

She says Bilawal wants to work with a bottom up approach where first he understands party cadres and party structure and disseminate party’s message gradually to the masses. “But I think it is not going to be overnight. He knows that, and we know that. He is here for the long haul. He wants to work collegially. He wants to work from bottom up,” says Sherry. This reply is enough put a dampener on the hopes of Nawabzada Ghazanfar and his ilk who want to see Bilawal at the helm – that, too, without wasting time.

The PPP, an avowed liberal left-wing leaning party, had ordered a military operation against the obscurantist Taliban in Swat during its rule in 2008. Its vocal and staunch opposition to religious extremism had earned the party the Taliban’s ire. Several PPP leaders, including Chairperson Benazir Bhutto, were targeted by the banned Tehreek-e-Taliban Pakistan. In the run-up to the 2013 elections, the TTP had threatened to target PPP’s political meetings, forcing the party to restrict electioneering – the fact that the party believes had led to its humiliating defeat in the elections.

PPP’s founding chairman Zulfikar Ali Bhutto had cast a spell on peasants, workers and other downtrodden segments of society with his slogan of ‘roti, kapra aur makan’ for all. And this promise of an egalitarian society had earned the party widespread support among the populace.

Rehman says the party will focus its policies on what she calls ‘bottom of the pyramid’; destitute segments of society – labourers, peasants, women, minorities and the youth – which forms the bulk in the country’s current demography. How?  “This will be achieved through conventions and discussions and use of the mass media,” she says.

The strategy, though in line with the current security paradigm, contradicts with what the PPP was known far and what its workers still expect from it. Rehman believes that as of now Bilawal is himself in no rush nor does the party want to ‘throw him’ at the deep end due to security concerns.

The PPP, which has been ruling Sindh for the past eight years, is blamed for not delivering and its government for widespread corruption and mismanagement. Top federal agencies have mounted an anti-graft hunt in the province and some senior PPP leaders have been netted thus far – much to the chagrin of the party.  A high-level huddle of the party decided Saturday in Dubai that it would resist ‘interference’ of the federal agencies in the Sindh government.

According to Rehman, the Dubai session will also take up the real issues confronting the masses. However, it is unclear which ‘real issues’ came up for discussion in the convivial gathering of party’s bigwigs in the plush Emirati city. Retrospectively, politicians always become impervious to all criticism and lose interest in the egalitarian measures they profess in public whenever such measures clash with their personal interests.