The hottes­t day in Septem­ber in the city was record­ed in 1951
By Sameer Mandhro
Published: September 21, 2015
Tweet Email 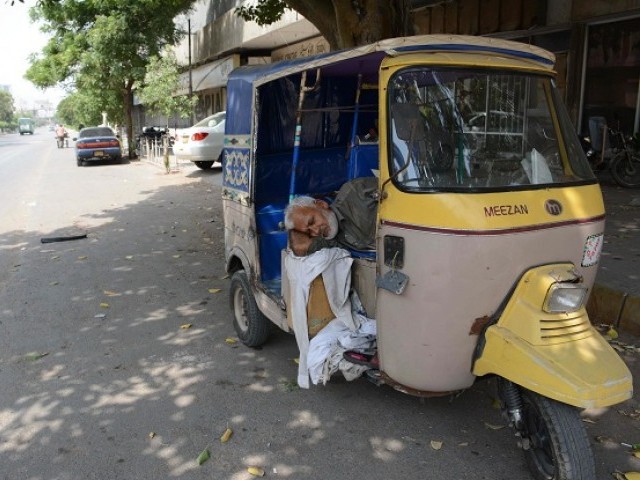 KARACHI: It has been 64 years since the mercury shot to 42.8°C in the month of September in Karachi. Over two dozen people were hospitalised and an elderly man died as the metropolis braved the heatwave this weekend.

The hottest day in September in the city was recorded in 1951. “It was September 30 and the temperature touched 42.8°C,” said Abdul Rasheed, the focal person of the Pakistan Meteorological Department in Karachi.

This Saturday the temperature reached 42.7°C and reduced to 42.5°C by Sunday. Rasheed said the situation will, more or less, remain the same until Tuesday. “But the mercury will fall below 40°C by Wednesday.”

Rasheed, however, said light rains are expected on Tuesday in eastern Sindh, including Mirpurkhas – where it has already started raining – and Sukkur divisions. “A low pressure in the Arabian Sea caused rain in Lahore and hot weather in Karachi and other parts of Sindh.”

Read: Stay indoors from 11am to 4pm today, tomorrow

Following the forecast of a heatwave, the Sindh Health Department had declared a state of emergency at hospitals across the province. Over 70 heatstroke centres have been established in Karachi alone.

Officials said more than two dozen people were admitted in different health facilities in the city over the weekend. Zahid, 63, was brought dead to the Karachi Institute of Heart Diseases, said Salma Kausar, senior director of the Karachi Metropolitan Corporation’s Medical & Health Services.

Dr Zafar Ejaz, health official for the Karachi division, said two control rooms have been set up and all necessary measures taken to deal with any situation.

Dr Seemin Jamali, the head of the emergency ward at the Jinnah Postgraduate Medical Centre (JPMC), said her hospital had received only two patients with heat-related complications and both of them made a full recovery. “Like all the other hospitals, we were prepared.”

On a visit to the JPMC on Sunday, Information Minister Nisar Khuhro said the K-Electric has been asked not to carry out power cuts in the city during the heatwave. “The power utility will be responsible for all causalities.”

Meanwhile, environmentalists believe the change in weather this month indicates the impact of climate change in the region that will continue to manifest in different forms in the coming years.

Read: Hot weather to plague Karachi for next three days

Ambreen Aziz, faculty member of the Sindh Madressatul Islam University’s environmental sciences department, said the current weather situation is the outcome of global environmental pollution. “The developing nations suffer due to industrialisation of the developed nations.”

She said it had already been predicted that environmental changes would affect Pakistan, especially its coastal belt. “Our government is not taking environmental issues seriously.”