Obama leads US in moment of silence on 9/11

Obama leads US in moment of silence on 9/11

Obama and his wife Michel­le stand on the White House lawn to observ­e a moment of silenc­e to mark the 14th annive­rsary
By AFP
Published: September 11, 2015
Tweet Email 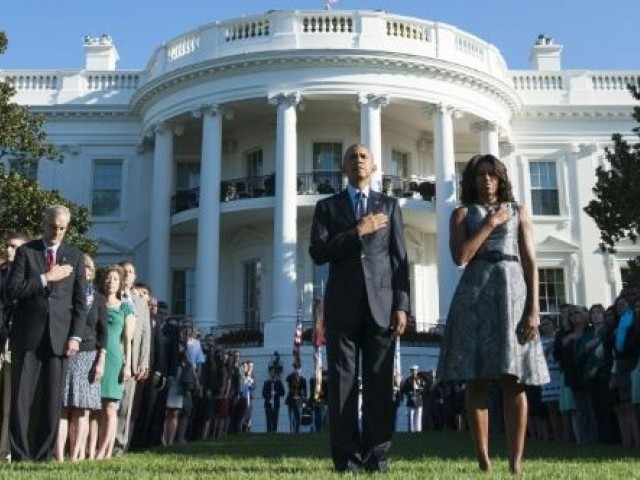 Barack Obama and Michelle Obama observe a moment of silence on the South Lawn of the White House on September 11, 2015, to mark the 14th anniversary of the 9/11 attacks. PHOTO: AFP

WASHINGTON: US President Barack Obama and his wife Michelle on Friday stood on the White House lawn to observe a moment of silence to mark the 14th anniversary of the 9/11 attacks.

The moment of silence was observed at 8:46 am – the time when the first jet commandeered by Al-Qaeda operatives smashed into the North Tower of the World Trade Center in New York, where a ceremony of remembrance also took place.

The attacks killed nearly 3,000 people in New York, at the Pentagon and aboard a hijacked airliner that went down in Pennsylvania.

At the White House, a few hundred people – political staff including National Security Advisor Susan Rice but also the White House chefs, gardeners and other residence staff – joined the Obamas for the ceremony.

In New York, police and relatives of those killed in the World Trade Center began the annual reading of the names of the victims at Ground Zero, now the site of the National 9/11 Memorial and Museum.

“Emotions and memories of 9/11 are with us so vividly today and always. We will #NeverForget our loved ones and first responders,” current New York mayor Bill de Blasio said on Twitter.

On Thursday, Federal Bureau of Investigation chief James Comey said there were “not any specific or credible threats” tied to the anniversary of the attacks, but that analysts were closely watching for threats from Al-Qaeda or the Islamic State.