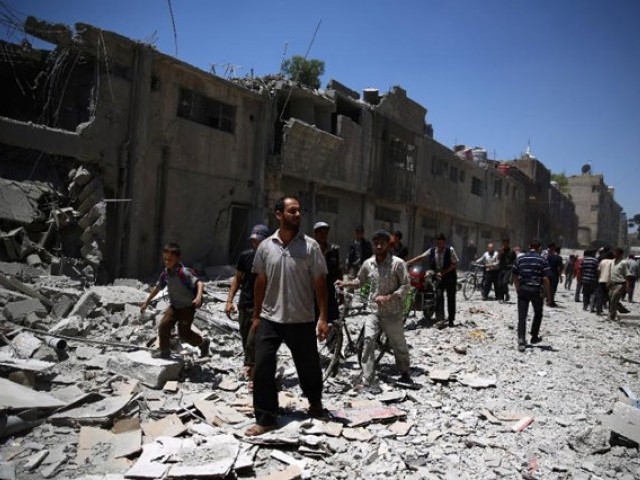 Syrians walk amidst the rubble of buildings in the rebel-held area of Douma, east of the Syrian capital Damascus, following air strikes by regime forces, on June 30, 2015. PHOTO: AFP

PARIS: If France launches air strikes on Islamic State targets in Syria, it will follow the United States and Britain in claiming it is acting in self-defence, but experts say such action could land it in difficult legal territory.

In a marked change of strategy, France began surveillance flights over Syria on Tuesday with a view to launching strikes on the extremists once targets have been identified.

Foreign Minister Laurent Fabius explained that if President Francois Hollande orders strikes, they would take place “under Article 51 of the United Nations Charter, in other words, in self-defence.”

“As soon as it is established that from Syrian territory, which is not entirely controlled by the Syrian government… Daesh forces (another term for the Islamic State group) are threatening French interests, both outside and inside France, it is perfectly legitimate that we defend ourselves.”

British Prime Minister David Cameron used the same argument this week to defend the unprecedented RAF drone strike that killed two British extremists as they travelled in a vehicle in the Syrian city of Raqqa on August 21.

Cameron told parliament it was the first such military action by Britain in a country where it is not involved in military operations — two years ago parliament rejected taking part in US-led air strikes in Syria.

“There was clear evidence of the individuals in question planning and directing armed attacks against the UK,” Cameron said.

The United States also brandished Article 51 to justify the drone and air strikes which killed high-profile US-born extremist Anwar al-Awlaki and subsequently his 16-year-old son Abdulrahman in Yemen in 2011, although American officials have described the killing of the teenager as a mistake.

Last year, a federal judge threw out a lawsuit brought by Anwar al-Awlaki’s father claiming that because the victims were Americans, the killings had violated their constitutional rights.

France’s defence ministry said any strikes in Syria followed the same reasoning as the action it has already carried out against IS targets in Iraq.

“It’s an extension of Operation Chammal,” ministry spokesman Pierre Bayle said on Thursday, using the name of the operation in Iraq.

Confronted with the ever-increasing web footage of executions and by the terror plots targeting the West, human rights organisations are finding it hard to openly condemn strikes on the groups behind the atrocities.

The foiled attack on a high-speed train in France by a suspected extremist in August only added to the political pressure on Hollande to take action against IS.

“It’s an extremely complex issue which we would prefer not to comment on openly,” one senior official at a human rights NGO told AFP, and asked not to be identified.

British legal affairs expert Joshua Rozenberg argued in The Guardian newspaper this week that the British drone strike that killed (IS) militants Reyaad Khan and Ruhul Amin was lawful.

If Khan had been hiding in a village or a compound, it would have been disproportionate to bomb the entire area, but as he was killed in a vehicle it “would be seen by many as a proportionate response to the threat (he) posed”, Rozenberg said.

“On the facts as we know them, this unprecedented attack on British would-be terrorists in Syria appears to be within the law,” Rozenberg wrote.

Aisling Reidy, a senior legal advisor at Human Rights Watch, cautioned however that if it does strike on Syrian soil, France would need to use the self-defence argument extremely carefully.

“Invoking the right to self-defence does not give the French government a blank cheque to conduct targeted assassinations under a general claim of threat to national security.

“Unless they can produce evidence of a direct and imminent threat of loss of life where using lethal force is essential to protect lives, then in accordance with human rights standards self-defence under the UN Charter does not give them the right to kill.”