Severa­l hours after her tweet, Sonam announ­ced that she would be sticki­ng to tweeti­ng about 'fashio­n and brands'
By Entertainment Desk
Published: September 8, 2015
Tweet Email 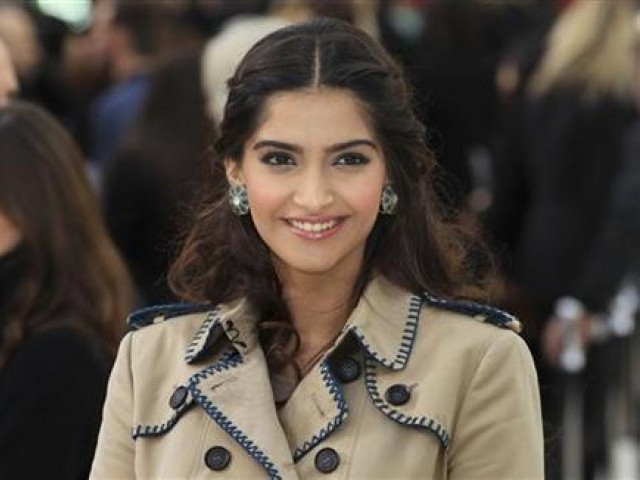 Actress called out the "intolerant misogynistic close minded few" who tried to shame her. PHOTO: REUTERS

Actress Sonam Kapoor was ravaged by online trolls on Tuesday after she ‘mistakenly’ included the word ‘misogynistic’ in a tweet related to the proposed week-long meat ban in Mumbai.

The controversial ban has disallowed the slaughter and sale of meat for the period of a Jain festival of fasting.

The 30-year-old actress retweeted a news report on the ban and wrote: Our country is going to remain a 3rd world nation because of the intolerant misogynistic close minded few. Almost instantly, a barrage of Twitter users began attacking for linking misogyny with the meat ban.

Our country is going to remain a 3rd world nation because of the intolerant misogynistic close minded few. https://t.co/JcIDEC3gQE

The actress spent the next few hours trying her best to explain how her tweets were about the general attitude of Indian society rather than describe the ban on sale of meat as derogatory to women. But there was no turning back, as is the case with most blunders on Twitter. At first Sonam tried to face all the hate she was receiving. But after replying to a few, the Khoobsurat actress simply clarified her stance saying: What I said was a critique of the general mentality .. Which is not exclusive to the banning of meat.”

@mithunkoppal no it doesn't moron

@Poulastya I was talking about our general mentality not only related to one ban!!!

@imimiselfi it's not only about the 'meat ban' sir it's a critique about the general mentality..

Sonam was equally agitated by the women who supported men with their trolling. She said: “And the saddest thing about this whole thing is.. That it’s mostly women who are calling me out on being bimbo. Guess it’s not only the men!”

And the saddest thing about this whole thing is.. That it's mostly women who are calling me out on being bimbo. Guess it's not only the men!

Read: I would love to work with Hrithik in a feature film: Sonam Kapoor

Several hours after her original tweet, Sonam announced that she would be sticking to tweeting about subjects she is popularly supposed to be expert in:

Well I guess it's back to talking about fashion and brands.. Lol

With Sonam being the latest victim of mocking, it seems that internet trolling has really become a part of the third world problems.

Navigating the sets with Najaf