Prime minist­er says backs of terror­ists have been broken, while their networ­ks have been disman­tled
By Web Desk
Published: September 7, 2015
Tweet Email 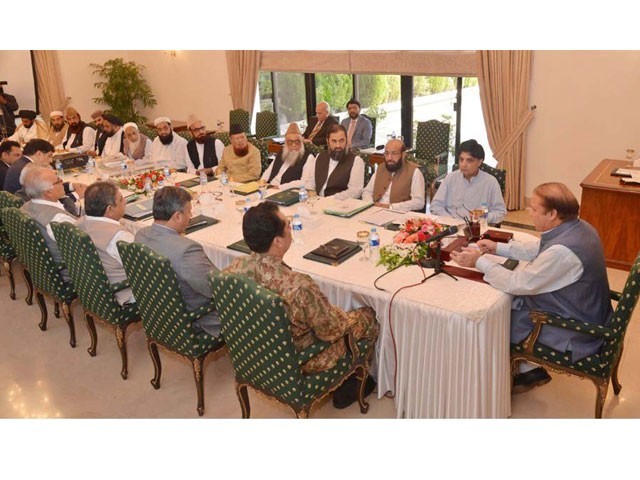 ISLAMABAD: Prime Minister Nawaz Sharif said on Monday that unity and cooperation at all levels was the need of the hour to eliminate terrorism from the country, adding that terrists’ back had been broken while their networks had been dismantled, Radio Pakistan reported.

While chairing a meeting of Ulema of Tanzeem Ittehadul Madaris — which is a conglomerate of five leading seminaries, the prime minister said that they were working to rid the country of terrorists.

The National Action Plan (NAP) was their common agenda and that everyone was on the same page to implement it.

Irreparable damage had been inflicted on terrorists and their networks have been dismantled, the prime minister said.

Nawaz, while assuring the Ulema that the government was ready to help them in introducing education reforms, said that the seminaries had to play a role in discouraging sectarianism and terrorism.

He added that a campaign to eliminate such tendencies should be launched by developing a counter-narrative.

The Ulema of Tanzeem Ittehad-ul-Madaris assured unconditional support to NAP and said that they were ready to extend any cooperation to the government in this regard.

Earlier he directed the authorities concerned to immediately implement the scheme of low-cost housing for the poor.

After a marathon meeting following the December 16 Peshawar attack, the country’s political leadership on December 25, 2014 approved NAP in a move described as a ‘defining moment’ in the fight against terrorism.