Victim remain­ed unhurt as his iPhone took the full effect of the bullet­
By Web Desk
Published: September 4, 2015
Tweet Email 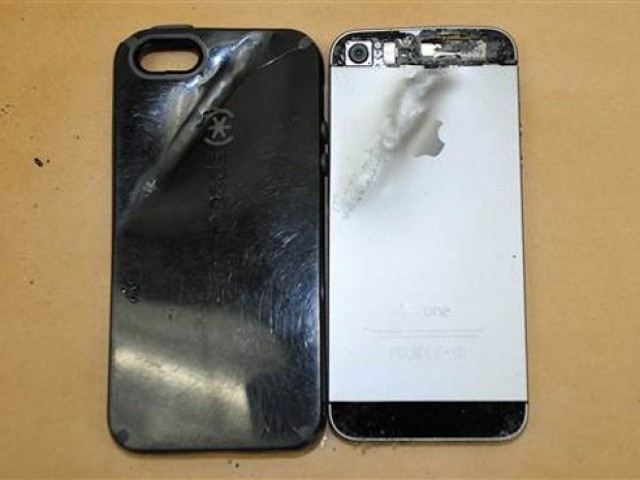 A Californian student was saved by his iPhone when it stopped a bullet fired during an armed robbery, KFSN reported.

The victim’s roommate, Faris Alotaibi, said, “The victim was shot in the leg and his phone prevented it from entering his body.”

The thief pulled a gun on the victim after following him inside the student apartment complex as the gates of the complex had been left open. The robber snatched the student’s backpack which contained his laptop. After that, he fired a single bullet and ran away.

“I looked at his jeans and it was torn open. He showed me the phone, the bullet was very clear, destroyed it and broke it into pieces,” Alotaibi said.

The victim remained uninjured as his iPhone took the full effect of the bullet. However, the robber is believed to still be at large.

Last October, a 25-year-old man had survived a gunshot when his iPhone suffered most of the damage. The man had sustained serious injuries to his abdomen but had managed to walk home.

Detective Inspector Gary McIntyre, investigating the shooting, said the incident was “remarkable”. “Had the phone not been in his pocket at that time he would undoubtedly have died,” he added.