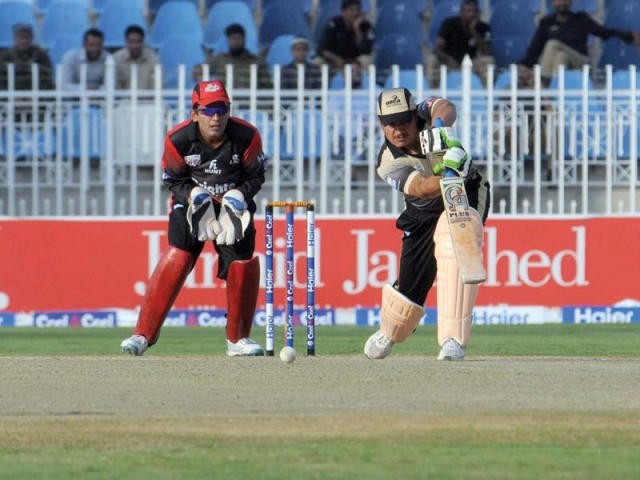 After suffering a seven-wicket defeat at the hands of Larkana in their opening match, Quetta failed to earn points on the second day as well. PHOTO COURTESY: PCB

KARACHI: Lahore Blues Region led Group A on Wednesday after beating Quetta Region by nine wickets, while Bahawalpur registered a three-run win over DM Jamali Region on the second day of the Haier Q8 T20 Cup 2015-16 qualifiers at the Pindi Cricket Stadium.

Quetta were first restricted to 100 runs in 19.1 overs as man-of-the-match Salman Agha dismissed three batsmen, with Ataullah taking 3-13. Arun Lal (24) was the top scorer for the losing side.

Chasing 101, Lahore Blues reached the target in the 14th over, losing just one wicket in the process as Imamul Haq scored an unbeaten 57 off 41.

Adnan Akmal managed to make 12 runs before being sent off for obstructing the field.

In Group B, Bahawalpur posted 130 in their allotted 20 overs with the help of man-of-the-match Faisal Mubashir hitting 66 off 42 balls, while Imran Khan and Nasir Khan bagged two scalps each.

DM Jamali were then dismissed for 127 as Muhammad Imran snapped up two wickets. Nasir Khan (33) and Najeebullah (33) were the team’s highest scorers.