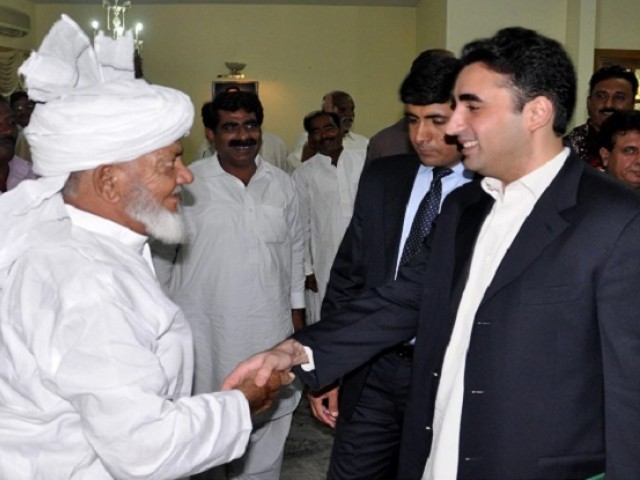 Pressure on members of the Election Commission of Pakistan (ECP) continues to mount as the Pakistan Peoples Party (PPP) has formally joined the chorus seeking their resignation, saying the party will not contest any by-elections held by the incumbent commission.

Talking to the media outside the Zardari House, PPP leaders Sherry Rehman, Latif Khosa and Manzoor Wattoo said transparency demanded the ECP members quit office and that a new commission be constituted.

“We had accepted the results [of the 2013 general elections] for continuity of the system,” said PPP Vice-President Sherry Rehman. “After due deliberations, we think the ECP members should resign. If they continue to hold office, it would be difficult for the PPP to participate in any by-polls.”

PPP Punjab President Manzoor Wattoo announced that the party would no more pursue the policy of reconciliation with the ruling Pakistan Muslim League-Nawaz.

Meanwhile, during his stay in the federal capital, PPP Chairman Bilawal Bhutto Zardari held a meeting with district-level office-bearers from Punjab and Khyber-Pakhtunkhwa. PPP workers complained to him that the party’s ‘docile attitude’ had damaged its credibility and that it should act as a vibrant opposition if it wanted to regain the ground lost during the ‘pathetic’ five-year government of the party.

On the subject of the ECP, former Punjab governor Latif Khosa said the commission’s prime function was to ensure transparency in the elections. “But it failed to do so.”

He said that although the PPP had reservations over the final outcome of the judicial inquiry commission that probed alleged rigging in the previous general elections, the report pointed to shortcomings on the part of the ECP. “Similarly, the recent verdicts of the election tribunals on rigging complaints also prove that the ECP had failed to perform its constitutional role during the polls.”

Khosa said the then chief election commissioner (CEC) had resigned after the polls and a new CEC had replaced him. “However, the ECP members didn’t quit office, ignoring their moral obligations.” PTI chief Imran Khan, a harsh critic of the incumbent ECP, has announced that his party would stage a protest sit-in in front of the ECP headquarters on October 4 if the members did not resign by then.

Appointed in 2012 for a fixed five-year term, the ECP members (retired judges of the four high courts) are due to retire next June.

Unless they quit voluntarily or a case of misconduct is proven against them in the Supreme Judicial Council, the CEC and the members cannot be removed from office.

With the 18th amendment to the Constitution, not only did the nomenclature and procedure of the ECP change, but the legal role of the commission’s members was also enhanced.

The CEC and the members share equal powers. The CEC does not enjoy any discretionary powers when it comes to important decisions in the commission.

Parliament is already deliberating on a package of electoral reforms. Among the proposals is the possibility of appointing people other than retired judges as ECP members.

Meanwhile, when asked to comment on media reports that three ECP members had made up their mind to resign, ECP Secretary Babar Yaqoob Fateh Muhammad said he could not comment on the issue without the opinion of the members.