Why waste four years of your life for a piece of paper when you can just buy mine, Ritter writes on eBay
By Web Desk
Published: August 28, 2015
Tweet Email 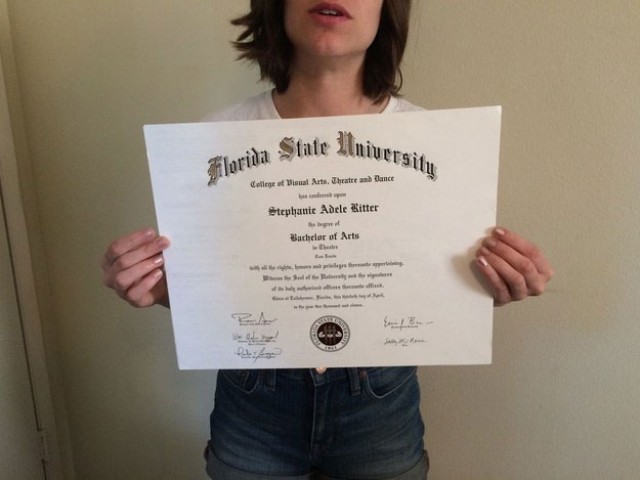 Why waste four years of your life for a piece of paper when you can just buy mine, Ritter writes on eBay. PHOTO: EBAY

In order to pay off a $50,000 student loan, a 2011 graduate of Florida State University’s School of Theater is set to sell her diploma and “college experience” on eBay.

Frustrated Stephanie Ritter, recently posted a sarcastic, yet very real eBay listing which described her diploma as being in “Mint condition” and “Never been used to get a job.” “I thought this piece of paper has so much worth to so many people, but for a theatre major, it couldn’t mean less,” she said. “I’m doing the exact same things and probably getting paid the exact same amount as people that dropped out halfway through freshman year, except I’m still $40,000 in debt and they’re, well, not,” Ritter added.

Ritter’s sarcasm grew in the item description on the website, as she wrote “Why waste four years of your life going to a state school for a piece of paper when you can just buy mine?”

Further, in an attempt to stand out from other candidates who have tried to sell their diplomas on websites in the past, she stated that she is selling more than just a diploma, she is selling her experience too which includes:

For all those who already have a college degree, did you know you it could be used as more than just a degree?

Warning high school students to be careful while applying to college, Ritter gave them an extra tip, “write letters to rich people around your town and ask them to sponsor you.”

In the case where nobody bought the young graduate’s ‘experience’, she revealed her backup plan saying that “If that falls through, honestly, [I will] just do that thing where I pay the minimum for 25 years and then the government feels so bad for you that they wipe it clean.”

This article originally appeared on BuzzFeed