PMD issues weather advisory for K-P as floods affect over 1.5m across Pakistan

PMD issues weather advisory for K-P as floods affect over 1.5m across Pakistan 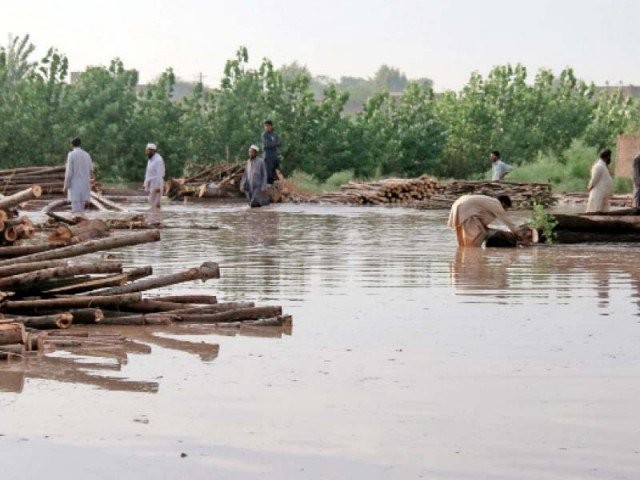 ISLAMABAD: A day after rains left 10 people dead in Khyber-Pakhtunkhwa, the Pakistan Meteorological Department (PMD) on Saturday issued a weather advisory for for the province, and some other parts of Pakistan warning that they are at risk of being hit by another spell flooding.

The Met Office has predicted that thunder showers with isolated heavy rainfalls are expected in K-P, upper Punjab, Gilgit-Baltistan and Kashmir from Friday to Monday.

“August 23 and 24 are very critical for K-P, northeast Punjab, hill torrents in DG Khan, Rajanpur and nearby areas as moderate to heavy rains are expected in these areas which could generate flooding and it is expected that water level in rivers could rise high,” said Director General PMD Dr Ghulam Rasul while talking to The Express Tribune.

Read: Washed away: 10 die as rain brings trail of destruction in K-P

Rasul further said that the Met Office has directed all the concerned departments to remain on high alert from Friday to Monday and take maximum preventive measures in order to avoid massive damages and loss of human lives.

Sharing details, he said monsoon currents have already entered upper parts of the country from Thursday and a westerly wave is also likely to grip those areas on Friday evening.

This will cause heavy rain falls in isolated areas of Rawalpindi, Gujranwala, Hazara, Peshawar, Mardan Divisions and the catchment areas of major rivers may receive heavy at times very heavy falls during Friday night to Sunday.

Dr Rasul said that this spell will be of short period, however, it is expected that in Pakistan monsoon season will remain active till the second week of September.

Meanwhile, talking to The Express Tribune, Sub-Divisional Officer at Rawal Dam Rana Bilal said that they had received the weather forecast for Friday till Monday. In light of the predictions, they had opened the spillways of Rawal Dam on Friday evening by 0.5 feet to create space for the storage of rain water.

“So far around 3,945 acre feet of water has been discharged into to the dam,” he added.

According to the National Disaster Management Authority (NDMA), so far 1,516,174 people have been affected by floods across the country. Around 216 people have been killed due to the floods.

The highest causalities have been reported in K-P, so far, where floods have killed 95 people and some 99 people have sustained injuries.

Punjab follows where 55 causalities have been reported and 11 have sustained injuries. AJ&K has reported 26 causalities and five people were injured.