'Pakistan will call off talks if India blocks Hurriyat meeting'

'Pakistan will call off talks if India blocks Hurriyat meeting' 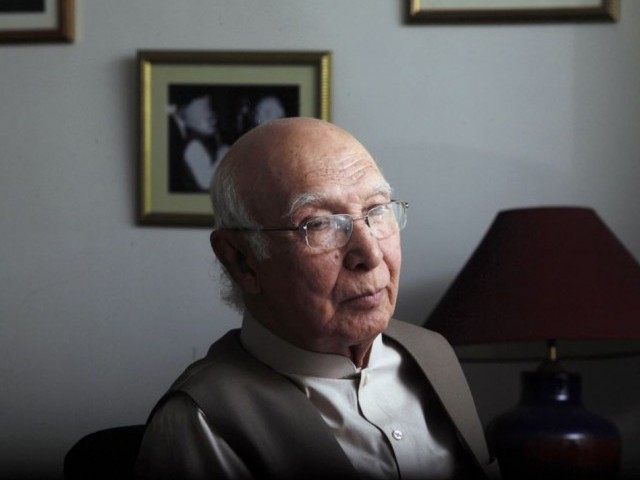 ISLAMABAD: After a series of tense exchanges between India and Pakistan over a scheduled meeting between Sartaj Aziz and Hurriyat leaders, New Delhi on Friday called off National Security Adviser-level talks with Pakistan, reported the Press Trust of India.

Moments before the development took place, Islamabad said it would call off talks between the national security advisers of Pakistan and India if New Delhi attempted to thwart the meeting between Hurriyat leaders and PM’s Adviser on National Security and Foreign Affairs Sartaj Aziz, a senior government official told The Express Tribune on Friday.

“We cannot be seen as engaging with India if they stop the Hurriyat leaders from meeting us,” said the official when asked whether Pakistan will go ahead with the NSA talks if India puts Kashmiri leaders under house arrest to prevent them from meeting Aziz.

The official, who wished not to be identified, said if Pakistan accepts India’s preconditions, this will set a dangerous precedent for future engagements.

Responding to a question on whether Pakistan is ready to take the blame for the cancellation of talks, the official said, “At this stage, principle is more important.”

The standoff ahead of the talks has now put the much-talked about meeting between the national security advisers in serious danger of being called off.

However, it appears that both sides are playing a ‘staring contest’ to see who ‘blinks’ first.

“The foreign secretary conveyed to the Indian High Commissioner that it would not be possible for Pakistan to accept this advice,” a press release issued by the Foreign Office said on Friday.

On the other hand, the Indian government Indian government on Friday called Pakistan’s move to invite Hurriyat leaders for consultation, ahead of their National Security Advisors meeting, a ‘provocative’ attempt to “evade its commitment at Ufa to engage in a substantive discussion on terrorism.”

In a statement issued by the Indian External Affairs ministry, spokesperson Vikas Swarup said “The insistence on meeting Hurriyat as a precondition is also a complete departure from the Ufa understanding.”

Swarup further said that the meeting “would not be appropriate” or in “keeping with the spirit” of a pledge to jointly combat the threat from militants.

He claimed that during the meeting between the two prime ministers on the side lines of Shahghai Corporation Organization in Ufa earlier this year, it was decided that they would discuss cross-border terrorism and ceasefire violations along the Line of Control and the Working Boundary during the NSA meeting.

The spokesperson further said that “India has always held the position that there are only two stake holders in our relationship, not three.”

We are firm on our stand that whatever talks are held with Pakistan should only be on terrorism: Home Minister Rajnath Singh.

India wants talks only on ‘terrorism’

Indian Union Home Minister Rajnath Singh said on Friday that they remain committed to the agreement reached between premiers of Pakistan and India in Ufa, and to engage in a substantive discussion on terrorism, NDTV reported.

Speaking at an event in Lucknow, the Indian home minister said that, “We are firm on our stand that whatever talks, dialogue are held with Pakistan, that should only and only be on terrorism.”

Sigh also asserted that “talks and terrorism could never go together” while elaborating that India’s intentions were clear to have dialogues with Pakistan but ‘that should only be on terrorism’.

“We stick to commitment between Prime Minister Narendra Modi and his Pakistani counterpart Nawaz Sharif in Ufa to engage in a substantive discussion on terrorism,” he said, adding, “It is to be seen what our neighbour have to say.”