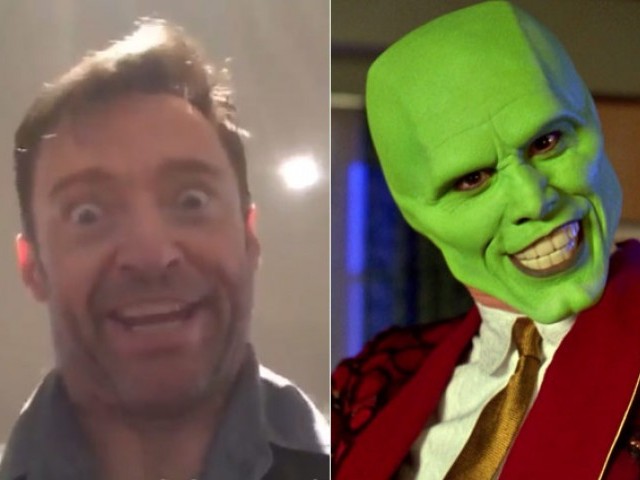 Hugh's followers even suggested he try for Bollywood after he uploaded his Dubsmash. PHOTO: FILE

Hugh Jackman is the Sonakshi Sinha of Dubsmash, and truth be told, we can’t get enough of his videos. This time he took on The Mask and Jim Carry promptly responded.

Well, here’s Hugh’s impression of it:

#JimCarrey mate trying my best to do justice! Clearly, I should stay in my own lane.

But the 52-year-old star’s caption was a friendly reminder that he cannot do justice do Jim’s role. His followers soon responded by applauding the actor’s efforts. One even suggested he should try for Bollywood.

Nice move @RealHughJackman Now watch me make a meal out of your biggest role. ;^> pic.twitter.com/GUfHB2RR4L

The X-Men actor is quite active on Instagram. Before posting this video, he uploaded one crooning to Katy Parry’s Teenage Dream:

Oh nothing much … just singing along to @katyperry! Living a teenage dream!!

He surely is living the teenage dream!

Apparently Hugh can sing as well! A few months ago he shared stage with singer and composer JJ McGeehan:

Performing with @jjmcgeehan. Truly one of the greats!!

And he dances too:

I am one lucky bloke! Dance rehearsals with my girls for tomorrow night's first show in Istanbul at the Zorlu.

Twinkle Khanna is the only woman I ever fell in love with: Karan Johar