Playing for peace: Peshawar all set for 31st National Games

Playing for peace: Peshawar all set for 31st National Games 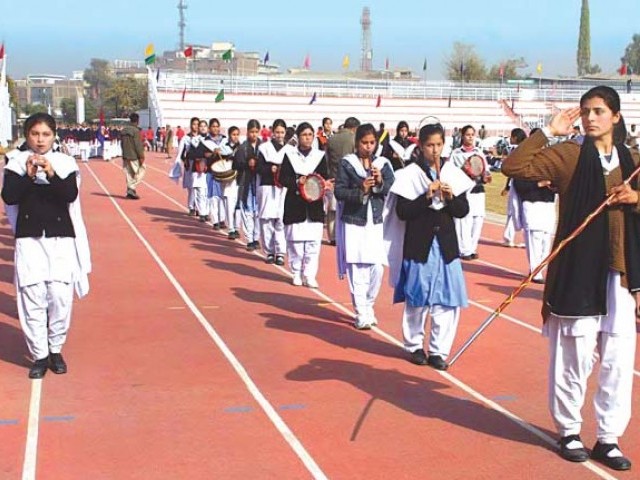 Players march during rehearsal at Qayyum Sports Complex for the upcoming 31st National Games to be started in Peshawar from December 25. PHOTO: APP

PESHAWAR: Twice postponed due to security threats, the 31st National Games are finally being held in the provincial capital from December 25 to 31. The motto for the games is “play for peace”.

The games were originally scheduled to be held in Peshawar in November of 2009, but the plan was postponed due to aggravating security conditions in the city. The national games were then scheduled in March but were again postponed. However, now preparations for holding the mega sporting event are in their final stages.

At least 7,000 players from 15 organisations, including four provinces, Gilgit-Baltistan, Federally Administered Tribal Areas (Fata) and Azad Jammu and Kashmir (AJK) are participating in these events. Qayyum Stadium Complex, where inauguration and concluding ceremony for the games will take place, is witnessing activity – an unusual phenomenon for the city locals for the past some years.

The major roads of the city have been festooned with banners welcoming players, while security has been beefed up with security barricades being set up on Bara Road in Peshawar cantonment limits.

“I hope the games take place peacefully,” said Samia Sehar, a Lahore-based athlete of Water and Power Development Authority (Wapda) while talking to The Express Tribune. “My parents were hesitant in letting me come to Peshawar given the security risk,” she said. She added that along with her teammates, she plans to stay indoors and avoid going to the markets.

“Pakhtuns are well-known for their hospitality,” said Bushra, the Wapda coach. She said that after arriving in city, the team members have been busy with their practice and have not gone outside. She hoped that the games are held in a peacefully.

Manzar Khan, an organiser, said that they were eager to receive all the guest players in the city. “This event will restore some of the lost lustre of the provincial capital, which was overshadowed by terrorist threats,” he said.

Khyber-Pakhtunkhwa (K-P) Minister for Sports, Culture and Tourism, Syed Aqil Shah, who is supervising works at Qayyum Stadium told The Express Tribune that all arrangements to hold the games have been made and he was “satisfied with the security arrangements”.

He said that under the security arrangements, all guests will have to come to stadium through Col Sher Khan Stadium on Khyber Road. The authorities will provide a shuttle service to all the visitors and this arrangement will be for the whole period of games.

Shah said that Executive Committee of Pakistan Olympics Association (POA) earlier held a meeting in which POA Chairman Arif Hassan expressed his satisfaction over the arrangements for the national games.

He said that players of the departments including PAF, Air Force, Railway and Higher Education Commission will stay at their own facilities. He added that the number of teams participating in the games had drastically increased as Fata, AJK and G-B were also participating. He said that Pakistan Army will also aid in ensuring security during the event.

In November 2008, a suicide bomb attack killed at least four persons and injured around a dozen at the gate of Qayyum Stadium during the concluding ceremony of the Inter-Provincial Games.