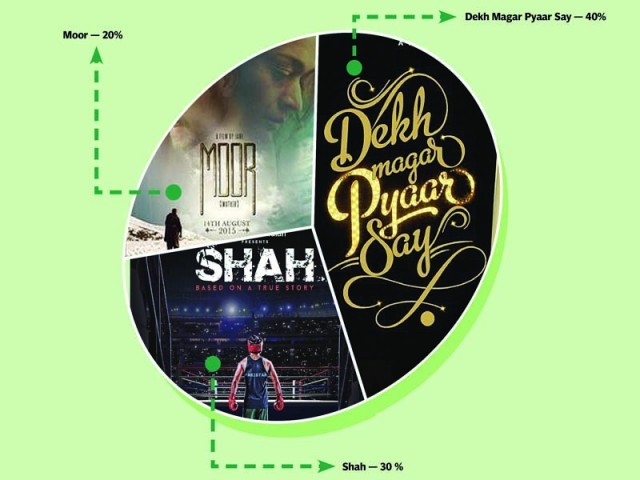 Remaining 10% will be divided between Bin Roye, Brothers, Wrong No, Bajrangi Bhaijaan, Man from UNCLE and MI: 5. PHOTOS: PUBLICITY

The second half of 2015 has shaped up very nicely for Pakistani cinema. Having gathered momentum following the release of multiple Pakistani films — Wrong No. and Bin Roye – on Eidul-Fitr, the box office seems to be ‘choo-chooing’ in at full steam towards the local box office.

It is difficult to remember a time when Pakistani cinema owners were spoilt for choice. The 2015 Independence day not only marks the country’s 68th birthday but also the first time in almost 40 years that three local films — Dekh Magar Pyaar Say, Shah and Moor — would be releasing simultaneously.

But unlike previous holiday weekends, of Eid, none of these movies are bound to leave a dent at the local box; but can be a real ‘tour de force’ when combined.

Given that there will be a total of 11 movies, the upcoming holiday weekend has a Royal Rumble-esque sense to it with movies of all genres competing against each other.

With cinemas still reeling from the Eidul Fitr hangover as previously released Pakistani films — Wrong No, Bin Roye and Karachi Se Lahore — still churning out decent numbers, exhibitors will be in a real fix regarding scheduling.

Single-screen and multiplex cinema owners have already termed Dekh Magar Pyaar Say as the movie-to-beat but the film faces an uphill task if it is to come out on top.

Exhibitors have also shown a desire to promote local content over Bollywood, such as the Akshay Kumar-starrer Brothers, which they thought was unlikely to have the same impact as Bajrangi Bhaijaan.

Here are our box office predictions:

No of Screens: More than 70

According to several exhibitors, the movie has all the ingredients to lure audiences. Already, multiplexes and single-screen cinemas across Pakistan, have shown a readiness to screen the movie.

Director Capri Cinema Farrukh Rauf, expressed his confidence over the film and said, “If the film performs as per expectations than the three-day gross for the long weekend is expected to touch around Rs2 million at Capri only.”

Primarily shot in Lahore, audiences in Punjab are more likely to relate to the movie and with more screens in the region, it is expected to generate a lot of revenue from Punjab. Khorem Goltasab, the general manager of Super Cinemas in Lahore, believes that despite getting many things right, the movie’s performance in multiplexes is expected to be better than in single screens.

“The movie would do great because it already has a large female fan following. Also people want to watch light (comedy) films, they don’t want to see serious dramas,” Goltasab told The Express Tribune.

Until the release of the movie’s trailer not many people knew about the film, but the film’s journey shares a lot of similarities to its rags-to-riches plot and has enough potential to do an upset at the box-office.

Given its swift rise through the ranks cinema owners believe that the movie would benefit greatly from the “patriotic factor”. Exhibitors and distributors feel that the story of the movie is such that it can “unite the audiences under the flag of the nation.”

Despite this, the general belief is that the movie is going to generate a major share of its earnings from multiplexes rather than single-screen cinemas.

Of all the movies to release this year none have had the kind of hype like more that of Moor. But it has been delayed for so long that all of the excitement and buzz seems to have toned down.

According to Nadeem Mandviwalla, the producer of Moor, they would not be aiming the movie at all audiences due to its serious content. “It is serious cinema and might not do so well in single-screen locations,” he told The Express Tribune.

Made on a budget of approximately Rs50 million, the movie (like all other Pakistani releases) would bank heavily on word-of-mouth. He added that, “None of the movies that are being screened right now are exceptional in terms of face value, but if they do well, they will gradually pick up in terms of business through positive word of mouth.”

With previous movie releases — both local and international — still performing impressively, it is very unlikely that any of these movies will do exceptional business but collectively we might be in for a record-breaking weekend.