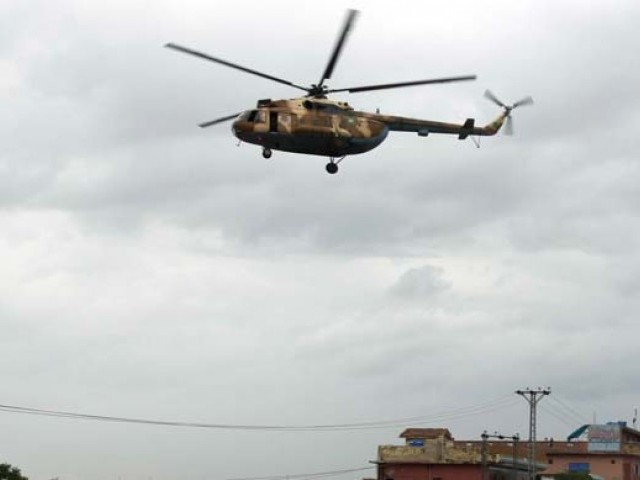 MANSEHRA: As many as 12 army personnel were killed when their helicopter crashed near Mansehra on Thursday evening, military officials confirmed.

“There were 12 military men with doctors, paramedic and aviation people on board,” a senior military official said. Five of those dead were identified as servicemen with ranks of Major.

The crash is suspected to have been caused by bad weather as the helicopter flew over the mountains while heading towards Gilgit-Baltistan from Rawalpindi.

An official of the military’s media wing confirmed the incident, adding that the helicopter was carrying relief items and medicines in addition to evacuate a critically injured soldier from Gilgit.

Rescuers pulled 11 bodies from the wreckage with at least one body missing. Eye witnesses said that the helicopter had caught fire after crashing.

The charred corpses were burnt beyond recognition and the aircraft, which was carrying aid supplies, was still on fire late into the evening.

“The accident occurred in a hilly area that is not easily accessible, and the helicopter is still on fire,” senior police official Nujeebur Rehman said.

The military has been operating helicopter flights in the region to aid with flood relief and rescue efforts.

Earlier in the week, the National Disaster Management Authority had requested the government for two helicopters to carry out relief and rescue work in the flood affected areas of the province.

The Russian-built Mi-17, used by air forces across the world, has had a patchy safety record in recent years.

The accident comes hours after a helicopter of the Pakistan air force crashed in the flood-hit district of Chitral, although no causalities were reported.

In May, an Mi-17 army helicopter crashed at a holiday resort in the picturesque hills of Gilgit killing seven people, including two ambassadors.

According to a PM House statement, the prime minister expressed his condolences over the loss of lives of army personnel in the incident.

He also commiserated with the families of the deceased in the tragic incident.